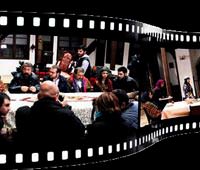 Turkey is about to embark upon yet another first as part of their democratic initiative to instill further rights for Turkey’s Kurdish citizens by way of broadcasting the first-ever Kurdish television series on a state-run channel.

TRT Şeş is about to release their first television series ever filmed in Kurdish. Entitled Siya Mem u Zin (In the Shadow of Mem u Zin), the program's very first episode will premiere at the end of February at a gala which will be attended by the Prime Minister as well as a series of ministers.
While filming continues in Malatya's Arapgir district, the premise of the first-ever Kurdish television series, Siya Mem u Zin follows a love story grappling with feudalism.
Directed by Yusuf Güven and written by Orçun Onat, the television show stars Bilal Yörük and Yaprak Durmaz. In 2010, Mem-u Zin became the first work to ever be translated from Kurdish into Turkish, a project initiated by Minister of Culture and Tourism Ertuğrul Günay.

The television series is based around Mem, a mining engineer and Zin, an educated young girl whose interests involve sports and music. Mem is played by Bilal Yörük, while Zin is played by Yaprak Durmaz, who also previously played the role in the theatrical version of the show. The show was dubbed in both Turkish and Kurdish while filming and certain roles will have Kurdish voiceovers. Six original songs were composed for the series, which will later be released as a DVD.

Aytekin Mert, the owner of the show's production company ANB, emphasizes that "the existence of the state-run TRT Şeş television station is incredibly significant for all Turkish citizens that speak Kurdish and Turkish and believe in peace and democracy and unity and solidarity."