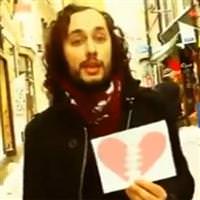 The music video, which was shot in the Swedish capital Stockholm and is of a song that portrays Turkish-Kurdish brotherhood entitled "Yaşasın halkların aşkı" (Long live the love of the people) is headed for a record in internet views.

In the video, Hakan Vreskala sings the song, whose lyrics were written Sivan Perver and melody by Sezen Aksu, in half Turkish, half Kurdish accents. In his own words, Vreskala states, "I am typical of Izmir. I am the boy of a family of white Sunni Macedonian immigrants." Hakan Vreskala calls out on the streets of Stockholm, "Turks and Kurds are brothers against all forms of racism and fascism. No one can come between them." His videos have reached such a stage of popularity that in the next few days, Vreskala will be performing his album entitled "Her Köyde Bir Deli Var" (There's Someone Crazy in Every Village) in Istanbul and Ankara.

Hakan Vreskala resides in Sweden where he has achieved significant success with his album and music videos circulating over the internet. Born in 1979 in Izmir to a Macedonian immigrant family, Hakan Veskala's musial career began when he played the drums for a group he formed in middle school called "Thrash". With his interest in percussions his music genres spanned from punk to folk songs.

In 2001, Vreskala was accepted to the Swedish Royal College of Music and relocated to Stockholm. Since then he has been performing on tour with well-known artists such as Sivan Perwer, Aida Nadeem, Ferus Mustafov and Lars Demian.