A conquest of Germany! 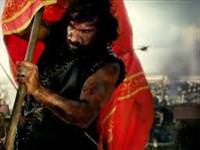 Since its release last Thursday in Germany alone, where it is showing in 82 theaters throughout the country, ‘Conquest 1453’, was viewed by 104,319 people in just four days.

According to information compiled by the German-based ''InsideKino'' internet website, the film, which depicts the life of Ottoman Sultan Mehmed II, spanning from his childhood to the time of his conquest of Istanbul, was released in 82 theaters in Germany last Thursday.


'Conquest 1453' was released in Germany on Thursday, February 16th and since then, over the past four days, has been viewed by 104,319 people. In Germany, the film came in second to none other than 'Yoko', a German film, in which 437 copies were released on the very same day and 114,178 people went to the see the movie. 'Conquest 1453' was followed by Steven Spielberg's 'War Horse' which had a viewership of 98,233.

In terms of the ratio of the number of viewers compared to the number of theaters the film was shown in, 'Conquest 1453', which was directed by Faruk Aksoy, easily topped the list for most interest shown.

On average, each theater that showed 'Conquest 1453' had 1,272 audience members, whereas the average number of viewers for every theater that 'Yoko' was released in was 261.

Produced by Faruk Aksoy, Servet Aksoy and Ayşe Germen, 'Conquest 1453' has also fast become the top fourth Turkish film to show in Germany. Up until now, the top three films in terms of highest viewers in the first four days of the film's release are in order, 'Recep İvedik 2', which was also produced by Faruk Aksoy, and had 189,205 viewers, 'Recep İvedik 3', with 152,085 viewers and 'Valley of the Wolves: Iraq' with 136,232 viewers.

Meanwhile, according to an announcement on the film's official website, 'Conquest 1453' broke an opening record throughout Europe with 255,000 viewers.