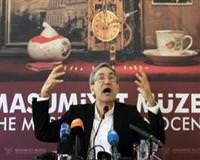 Nobel prize-winning Turkish writer Orhan Pamuk realizes a long-nurtured dream on Saturday with the opening of an actual "Museum of Innocence" - a collection of relics of a half-century of ordinary life - as depicted in his 2008 novel of the same name.

Pamuk set out "not to do a spectacular or monumental museum but something in the backstreets, something that represents the daily life of the city," he told a news conference after a press preview.

Situated in a bright, wine-red building in the district of Cukurcuma, the Museum of Innocence houses real and fabricated artifacts from everyday Turkish life between 1950 and 2000, in an homage both to the novel and to Pamuk's Istanbul.

He conceived of the museum more than a decade ago, at the same time he came up with the idea for the novel. A New York Times bestseller, "The Museum of Innocence" was his first book after winning the 2006 Nobel prize for literature.

The book tells the story of Kemal, who hoards ordinary items to recapture the happiness he felt during a passionate but ill-fated love affair.

The real life museum contains odds and ends that Pamuk collected from Cukurcuma junk shops, family and other donors. There are china dog figurines, old shaving kits and a wind-up film projector. A toothbrush collection, which features in the novel, was contributed by its real-life owner.

Pride of place goes to Kemal's lover's 4,213 cigarette butts, lovingly dated, archived and gently pinned to a canvas that occupies a full wall. Pamuk described the painstaking process of vacuuming out the tobacco to prevent worms.

The space was originally meant to open with the book's publication, but was beset with delays. It took Pamuk - working closely with a team of architects, artists and product designers - another four years to complete the project.

His Nobel prize money of more than 1 million euros did not fully cover costs, he said, declining to specify the exact cost of the museum. Royalties from the book will go towards upkeep.
While the project is distinctly personal, Pamuk insisted it is not autobiographical.

His protagonist Kemal is far too obsessed with his love and his compulsive hoarding to pay much attention to the social and political upheaval around him. His story takes place in Istanbul in the 1970s, a decade bookended with coups.

Pamuk, 59, is among Turkey's best selling writers. His work, including "My Name Is Red," "The Black Book" and the memoir "Istanbul," has been translated into some 60 languages.

He was charged with "insulting Turkishness" in 2005 for remarks he made about the World War One massacre of Armenians and the state's fight against Kurdish separatism since 1984. He was acquitted.
Pamuk is now at work on a new book told from the view of a street vendor eking out a living in one of sprawling Istanbul's shantytowns. His first book, 1982's "Cevdet Bey and His Sons," is now being made into a serial for television.