A ‘Silent’ stamp on Cannes 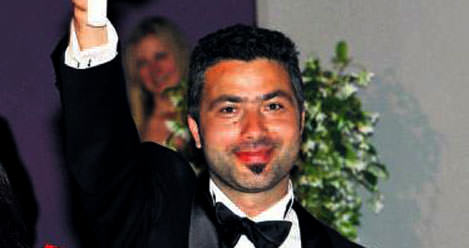 Austrian director Haneke won the coveted Palme d'Or for a second time with his film Love/Amour, while Rezan Yeşilbaş won the Short Film Palme D'or for Sessiz / Be Deng.

Turkish cinema has swooped up yet another award at the 65th Cannes Film Festival held over the weekend. Rezan Yeşilbaş's short film Sessiz / Be Deng, which was shown at the festival, was the recipient of the Palm d'Or for Best Short Film.

Yesterday's win makes Yeşilbaş the fourth Turkish director, following Yılmaz Güney, Nuri Bilge Ceylan and Fatih Akın to take the stage at Cannes in order to receive an award. Upon receiving the Palm d'Or, Rezan Yeşilbaş stated, "I want to dedicate this award to all of the women in my country that are silent and have been left on their own."

The film, starring Belçim Bilgin and Cem Bender is based in 1984 and tells the story of a woman named Zeynep and her attempt to deliver a new pair of shoes to her husband who is serving time in Diyarbakır, even though it is forbidden to do so according to prison regulations.

The Palm d'Or at this year's Cannes Film Festival was awarded to Michael Haneke for his film Amour/Love. The film tells the tale of an elderly couple facing the inescapable, yet no less tragic march of death. Matteo Garrone's film 'Reality' was the winner of the Grand Prix. Carlos Reygades was named Best Director for his film 'Post Tenebras Lux'. The Jury Prize went to Ken Loach for his film 'The Angel's Share'. Christian Mungiu won Best Screenplay for the film Beyond the Hills/Dupa Dealuri. This year's award for Best Actor went to Mads Mikkelsen for his role in Thomas Vinterberg's 'The Hunt'. The Best Actress award went to Christina Flutur and Cosmina Straran, who both starred in Christian Mungiu's film 'Beyond the Hills'.