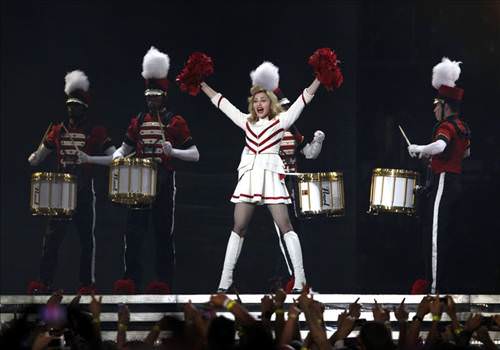 Even though the global queen of pop came on stage 45 minutes late at last night’s concert at the TT Arena, she still managed to woo the audience in her first performance in Istanbul since 1993.

Last night's long-awaited performance, 19 years to be exact, started off with impressive visual effects. The concert, which was scheduled to begin at 21:30, started at 22:15. The TT Arena was filled with Madonna's fans as well as European Union Minister and Chief Negotiator Egemen Bağış and his wife and children. Bağış also posed for photographs with other concert-goers.

Madonna began her 2012 World Tour from Tel Aviv on May 29th. As part of this tour, Madonna will also be performing in South America and Australia for a first in 20 years. The European leg of the tour, which kicked off last night with the impressive Istanbul show, includes 26 different European stops including London, Paris and Berlin.

Fans began forming long lines yesterday starting at noon at the Türk Telekom Arena in anticipation for the Queen of Pop's performance. Tickets off course had sold out days before…

Madonna arrived to Turkey on Tuesday accompanied by her children to perform in Istanbul for the first time in 19 years. Madonna's private plane touched down in Istanbul's Atatürk Airport at 20:20 Tuesday evening, where she was greeted with a red carpet.

While in Istanbul, Madonna visited both Hagia Sophia and Sultanahmet Mosque.