The star of the Turkish Olympiad 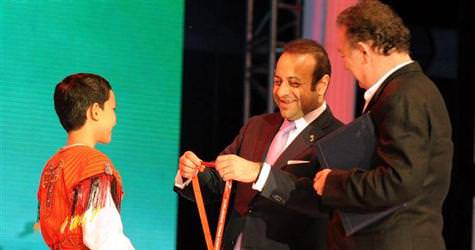 Ruslan Annamammedov from Turkmenistan won the ‘Star Singing Competition’ at the Turkish Language Olympiad for his rendition of İbrahim Tatlıses' “Gülüm Benim”.

Thousands came out to watch the Tenth International Turkish Language Olympiad, where children from around the world displayed their skills singing some of Turkey's legendary ballads. The jury's top pick last night was Turkmenistan's Ruslan Annamammedov.

A grandiose ceremony was held last night at the Ataköy Sinan Erdem Sports Center for the Singing Contest Finals for the Tenth Turkish Language Olympiad, held by the International Turkish Education Association (TURKÇEDER). A number of high-level state officials also attended the competition including Minister of Culture and Tourism Ertuğrul Günay and European Union Minister and Chief Negotiator Egemen Bağış.

Children from five continents came out to sing rendition after beautiful rendition of songs in Turkish. At the end of the evening, the jury selected Turkmenistan national Ruslan Annamammedov as the winner for his performance of "Gülüm Benim". Annammaedov received his medal from Minister Egemen Bağış. Eczacıbaşı Holding Executive Board Chair Bülent Eczacıbaşı was also given the honorary 'Kashgar Mahmut Turkish Language Award' for his contribution to the arts and literature.

Emphasizing the importance of Turkish schools, EU Minister and Chief Negotiator Egemen Bağış stated, "I have two children. Sometimes I tell them how lucky they are. That is because when we were their age, we were taught that Turkey was surrounded on three sides by water and on four sides by enemies. We were told that Turks had no other friends than the Turks. Never mind being able to teach people our language all over the world, we couldn't even teach our own citizens Turkish. Turkish schools are now establishments that secure friends for Turks that are other than Turks, they ensure that Turkish is spoken not only by us but throughout the world and have made Turkey's glorious nation commemorated with a truly unique sense of admiration and respect," stated Bağış who went on to offer his sincere gratitude to all of the teachers, "our caring friends who are the pioneers and have supported this caravan of service in teaching our beautiful language to youths throughout the world."
Expressing that he has been closely following the Olympiad which helps to form cultural ties between Turkey and the world, Minister of Culture and Tourism Ertuğrul Günay stated how proud he was , "When I witness our language, our Turkish waved gloriously throughout the world I feel like rejoicing the spirit of Mustafa Kemal, who stated that the Turkish nation, which knows how to protect their nation's independence, will be able to free the language of the Turkish nation from succumbing to foreign languages. Those who love their nation the most are the ones who serve it. I truly believe from my heart that our self-sacrificing teachers that have brought on this wonderful situation are true patriots."

At the close of the ceremony, the jury members, the children and ministers Günay and Bağış all took to the stage to sing the Olympiad's theme song 'Yeni bir dünya' (A New World.)