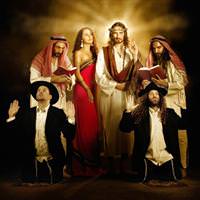 During a time when tension between Turkey and Israel had reached a peak, Orphaned Land ignored Israel’s safety warning against visiting Turkey and arrived to perform a highly anticipated concert for fans.

Speaking to the crowd during the concert, group vocalist Kobi Farhi, won over hearts by explaining that he was broken hearted when he heard of what happened on the Mavi Marmara and cried for days.

After the Mavi Marmara attack, Turkey offered Orphaned Land a 'Friendship and Peace 'award for their contribution to peace. Since then, the request made by members of Orphaned Land to take on Turkish citizen has been warmly accepted.

AKP founding member and an advisor to the Prime Minister Kütahya deputy Hüseyin Tuğcu is also in favor of the group taking on Turkish citizenship. In fact, Tuğcu, who is in contact with Minister of Culture and Tourism Ertuğrul Günay, has received support from the minister in expediting the process.

According to an article in Vatan newspaper, should the internationally acclaimed group take on Turkish citizenship, they will become influential ambassadors of peace not only for their own nation but also in reaching a solution to the Palestine issue. At the same time, when the group performs throughout the world, they will no longer solely represent Israel, they will also now be representing Turkey, instead of greeting fans by saying Shalom, Orphaned Land will instead say Merhaba as they announce they are from Turkey.

The group's manager in Turkey Derya Engin states, "Orphaned Land will be in Turkey to perform a concert in September. I hope that by that time the process will have been expedited and they will be performing their next concert in Turkey their second homeland as Turkish nationals."