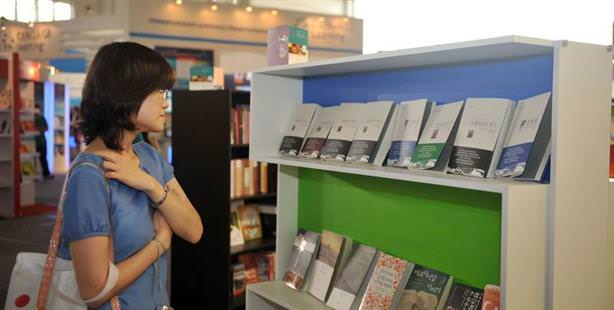 This year’s 19th Beijing International Book Fair marks the first time Turkey will have a stand showcasing works by the likes of Tuna Kiremitçi, Can Dündar and Orhan Kemal translated in Chinese.

As part of the Ministry of Culture and Tourism's TEDA Project (The Translation Subvension Programme of Turkey) intended to introduce Turkish culture, arts and literature abroad, ten literary works have been translated into Chinese and will be on display at the Beijing Book Fair which runs from August 29th to September 2nd.

The Beijing International Book Fair is set up in a 53,600 square meter area and has over 2,010 publishing houses and 75 countries and regions being represented. This year's guest of honor is South Korea. Nineteen different countries, including Turkey have opened stands and over 200,000 book lovers are expected to visit the fair.

Joining in on a panel entitled "Turkey Book Market" Libraries and Publications National Committee Coordinator Assistant General Manager Ümit Yaşar Gözüm reminded that this year is 'China Year' in Turkey and next year will be 'Turkey Year' in China. Gözüm explained how pleased they are that they have finalized the details on naming China the 'country of honor' in next year's Istanbul Book Fair, while Turkey is expected to be named the 'Country of Honor' for the 2014 Beijing Book Fair.

Ümit Yaşar Gözüm went on to explain that from 2005 to 2012 they have been able to translate 796 out of a designated 1,202 books in 51 different languages and from 55 different countries. Out of 12 projects supported for Turkish books to be translated into Chinese, eight have been completed and released thus far while the remaining four will be completed by the end of this year or the following year. Gözüm went on to explain that over the next three years they will be seeking out support and resources to translate Turkish works into Chinese and will be holding workshops in Istanbul for translators.

Gözüm says that at most ten books have been translated from Turkish into Chinese over the past ten years and explains that the greatest difficulty they are facing at present is finding translators from Turkish into Chinese and vice versa. According to Gözüm there are just two at most maybe three people in the country that are capable of translating into both languages and they generally can only handle two books a year, however the TEDA project aims to have 100 of these books translated over the next three years. Ümit Yaşar Gözüm went on to state that these translations contribute greatly to Turkey's tourism industry.