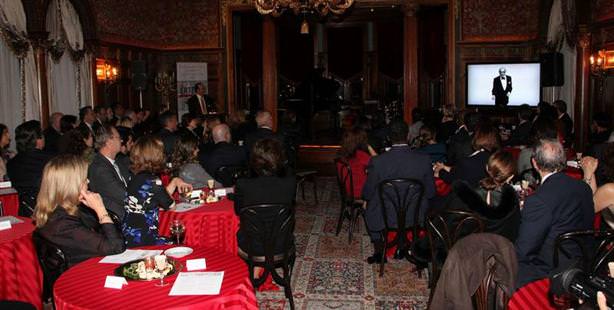 The “Ertegün Jazz Series” resumed with its 2012 series devoted to honor the former Turkish Ambassador Mehmet Münir Ertegün and his sons Ahmet and Nesuhi Ertegün who opened their doors to black musicians at a time when segregation was at a peak, thereby going down in jazz history, with a memorable performance by Cecile McLorin Salvant held at the Turkish Embassy in Washington.

The Turkish Embassy in Washington D.C. has had a history with jazz that spans back to the 1940's when Ahmet and Nesuhi Ertegün, the founders of Atlantic Records and the sons of the Ambassador at the time Mehmet Münir Ertegün would open their doors to black musicians to practice their skills for what were known as the most famous private jazz sessions to take place in the history of the jazz genre.
The Turkish Embassy in Washington is continuing the tradition of sorts, in honor of the highly respected Ertegün family with an exclusive performance series. On Monday evening, award-winning jazz singer Cecile McLorin Salvant was joined by Dan Nimmer on piano, Paul Sikivie on bass and Pete Van Nostrand on drums.

As always, the popular concert series drew members of the political, art and business worlds from Washington to the Turkish Embassy. Amongst the invitees were former U.S. Secretary of State Madeleine Albright, UNESCO) Goodwill Ambassador and Chairman of The Thelonious Monk Institute Herbie Hancock, U.S. Assistant Secretary of State for International Organization Affairs Esther Brimmer, U.S. Assistant Secretary of State for Educational and Cultural Affairs and Turkish Industrialists' and Businessmen's Association (TÜSİAD) Chairman Ümit Boyner who happened to be in Washington D.C. at the time.

The night kicked off with an opening address by Ambassador Namık Tan followed by a video detailing the life and career of the late Ahmet Ertegün.

A MESSAGE FROM HILLARY CLINTON

U.S. Secretary of State Hillary Clinton sent a message expressing her disappointment in being unable to attend this final concert in the Ertegün Jazz Series and offered sincere greetings to everyone in attendance. Clinton also thanked the embassy and Ambassador Tan for holding this very special concert series which commemorates the contribution Turks have made to American jazz music and said that it is the realization of this cultural exchange that will only strengthen ties between the Turkish and American public.

UNESCO Goodwill Ambassador Herbie Hancock also delivered an address which started with a Turkish greeting of ''İyi akşamlar'' to the audience. Hancock went on to express how pleased he was that Istanbul will be hosting the April 30th UNESCO International Jazz Days. Referring to Istanbul as "a wonderful city" Hancock recalled its 2,000 years of hosting significant political, religious and artistic events and stated that now Turkey can add the International Jazz Days to its already rich and creative cultural legacy. Hancock, who was a close friend of both Ahmet and Nesuhi Ertegün also said that he will always continue to remember and honor the brothers for their contribution to jazz music.