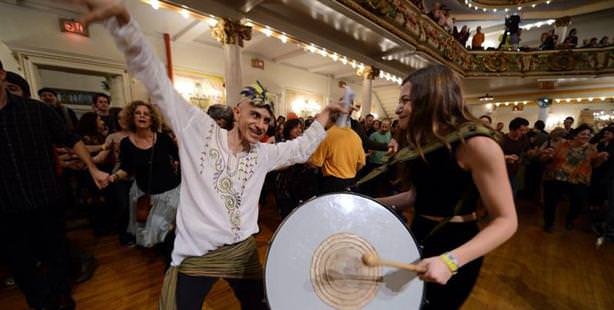 The closing night of New York’s Golden Festival, a two-night festival of Balkan music and dance brought out the spirit of celebration for Americans, while a number of the evening’s musicians devoted segments of their repertoire to Turkish ballads.

The closing night of the Balkan music festival, which was held on January 18th and 19th, brought out hundreds of invited Brooklyners who partied the night away. A number of groups who took the stage included Turkish songs in their repertoire which just added to the festive atmosphere, especially for those Turkish-native New York residents who came out to celebrate.

A talented female zurna player was one of the stand-out performances of the night while the constant drumming and clarinet combo, an indispensible duo in Balkan music, ensured no one remained sitting.
The festival, which took place in the Grand Prospect Hall in Brooklyn, sold over 10,000 tickets. Visitors were able to try a number of regional specialties, which also included Turkish delight and chechil cheese.

THE RHYTHMS OF THE OTTOMAN GEOGRAPHY

The music played at the festival, which included traditional instruments such as the saz, ud, kanun, def, bendir, zurna, tambura, kaval and ney, shows that the close ties between regions under the Ottoman empire's realm remain to be alive. The rhythms, melodies and tones of the music performed throughout the festival were noticeably reminiscent of music one would hear in Turkey. Kanun performer Umut Yaşmut, who performed along with the Macedonian music group Chalgıya Vino, stated, "Tonight we are able to experience the rhythms of the former Ottoman geography, its beautiful music and melodies. We are able to hear our own language and even see our own costumes here."