Palestinian youth visit the set of Valley of the Wolves 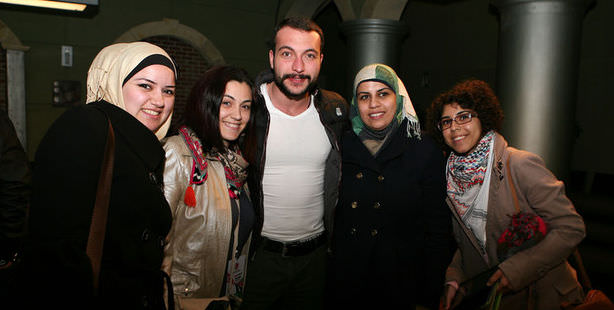 Thirty-five Palestinian youths from eight different nations paid a visit to the set of the popular Turkish television series Valley of the Wolves. The visiting group of Palestinians had the opportunity to meet with members of the cast and take photographs, while they shared the special significance the show holds for them.

Thirty-five Palestinians paid a visit to the set of the popular Turkish television series Valley of the Wolves (Kurtlar Vadisi Pusu) and had the opportunity to meet with members of the cast.

The group of young Palestinians came from a variety of countries and careers including poets, some employed in television and photojournalists, all which had the opportunity to meet and speak with cast members from the popular show.

Known as Murad Alamdar in Palestine, Polat Alemdar, who plays the leading role of Necati Şaşmaz, was unfortunately unable to make the event, however the group enjoyed sitting at and standing around his well-known table, even trying out delivering orders as his popular character does on the show.

THE SERIES MEANS A LOT TO PALESTINIANS

İman Atari, a translator at the Palestinian Foreign Ministry says he is a big fan of the show. "This television show is extremely meaningful for me, Palestine and the resistance. It is significant in terms of representing how people not only have to fight against external occupation of its country, but also have to battle forces within their own nation."

Photojournalist Usame Salih, who excitedly took a seat at Polat Alemdar's table, said, "I love the show. When Murad (Polat) comes on television on Friday nights I don't go anywhere."

AN ISLAMIC STYLE ON A MUSLIM CHANNEL

Amjad Aqil, an analyst for the Manchester Municipality expressed that being on the set was extremely enjoyable. "To witness such a great development on Muslim television and for Muslims to be able to express their own style in an Islamic form in their own media is a great feeling," said Aqil." Another Palestinian on set Farah Said, stated, "For Turkey to make a fuss of Palestine and for them to feel the same sentiments is very nice."

OTHER NATIONS ARE NOW IN LINE

The Palestinian group will be in Turkey from March 17-22, during which they will visit historical sites as well as meet up with Deputy Prime Minister Bülent Arınç. This year in addition to the group from Palestine, Turkey will also be hosting youth from Yemen, Nigeria, Somalia, Ireland, Poland and Bosnia Herzegovina.

This is a translation of an article originally written by Erdoğan Yapık.