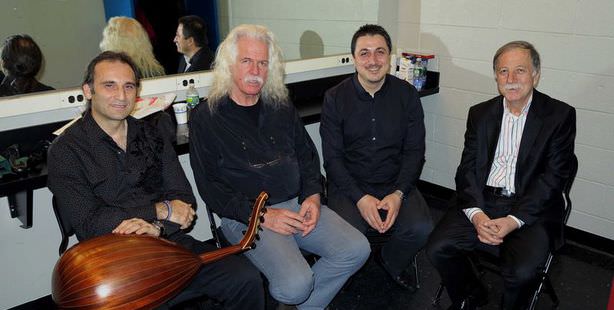 A concert entitled, “Sounds of the Bosphorus” organized by the non-profit organization ‘Makam New York’ was held in New York on Thursday.

Turkish and foreign music-lovers came out to watch the concert performed at Symphony Space in Manhattan. The concert, held by Makam New York as an effort to promote Turkish music and musicians abroad, was performed as part of a Turkish Music Institute Seminar.

Ahmet Erdoğdular, the founder of the non-profit organization, performed vocals and percussions, Ross Daly played the lyre and his self-constructed instrument the tarhu, while Yurdal Tokçan played the oud and Ömer Erdoğdular played the reed flute.

Speaking to the press, Ahmet Erdoğdular explained that Makam New York was formed in 2011. Since then the annual Turkish Music Institute Seminars have continued to draw in increasing interest, says Erdoğdular

Erdoğdular says that music lovers from all over America, Australia and Canada have been applying to participate in the seminar in order to learn about Turkish music and says that nearly 80 percent of the seminar's participants are foreigners.

Irish native musician Ross Daly said that New York is a place where many cultures meet, and is therefore one of the best locations for performing arts.

Yurdal Tokçan said that the music they perform allows them to better express themselves, while also adding that there is a rising interest in Turkish culture in the states.

Ömer Erdoğdular expressed how pleased he was due to the peaked interest in Turkish music.