The choir that performs for peace 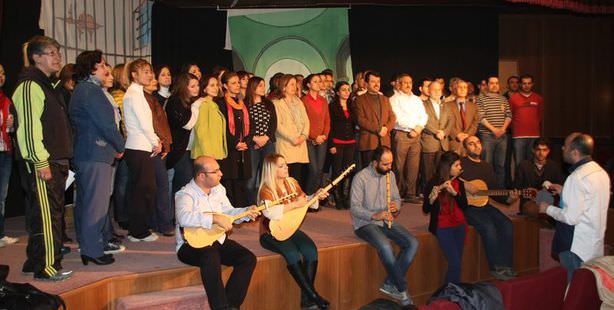 Conductor Özfırat of the Antakya Civilizations Choir, which consists of 150 members of a diverse variety of religious and sectarian backgrounds and performs in Turkish, Arabic, Armenian and Kurdish, says, “I want to spread the message of peace with my music.”

The Antakya Civilizations Choir (Medeniyetler Korosu) which recently performed a concert for the Wise Person's Commission, has 150 members that have performed over 220 concerts since its formation in Hatay in 2007.

The choir, which brings together Christians, Jews, Turks, Armenians, Sunnis and Alevis has a variety of members that span from students to housewives, businessmen to grandfathers and even an imam, which all take the stage together in the name of peace.

This unique choir performs Kurdish songs, psalms, folk songs and melodies in Turkish, Hebrew, Arabic, Armenian, Italian, German and English. The choir, which was one of 231 official candidates for the 2012 Nobel Peace Prize, performs under the slogan "We are all the servants of a single God".

The choir presents a fine example of 'the culture of existing in unity' and performs concerts at events without discriminating between differing viewpoints. They have performed in New York for members of the UN Security Council, including Prime Minister Recep Tayyip Erdoğan, as well as for the EU Parliament, the U.S. Congress, in Houston and in Athens to name just a few.

WE ARE THE SERVANTS OF ONE GOD'

Choir Conductor Yılmaz Özfırat says, "Our sole force is love and respect." Pointing out the fact that Turkey's greatest difficulty is with the Kurdish issue, Özfırat explains that they have also added a Kurdish song to their repertoire as an effort to contribute to the ongoing resolution process. "We want to spread the message of peace through our music. Our sole wish is for the bloodshed to come to an end in our region as well as in the Middle East. My dream is for everyone in the world to one day be a member of the Civilizations Choir. One day the number of our members, which is now at 150, will go up to seven billion. Our world deserves this," said Özfırat.

Lusinda Horoz, who at 21 years of age is the youngest member of the choir says, "I am a native of Antakya and I am 21 years old. I work as well as go to school. Both myself and my family were born here. We didn't come from somewhere else. Turkey is my native country. I am Armenian; however all of us in this choir have embarked upon a joint mission. We do not sing songs, we explain ourselves. We have received unbelievable response in all of the countries where we have performed. The Civilizations Choir has contributed greatly to my life."