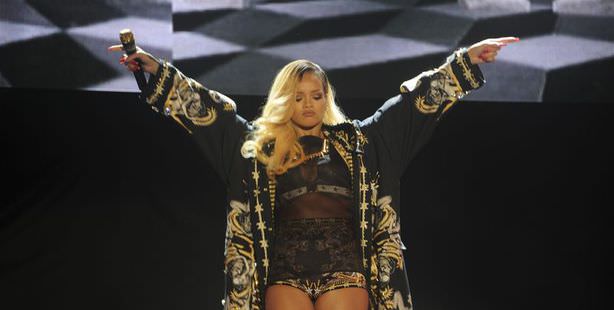 World-renowned pop star Rihanna performed a dazzling concert for an audience of 35,000 in Istanbul’s İnönü Stadium on Thursday night as part of her Diamonds World Tour.

Global pop sensation, Barbadian singer Rihanna performed a high octave show for 35,000 fans in Istanbul's famous İnönü Stadium. The concert marked the last performance to be held in the historical stadium overlooking the Bosporus. After flying into Istanbul on a private jet, Rihanna arrived to her hotel aboard a luxury yacht.

Having forgotten her stage clothes at the airport, Rihanna waited aboard the boat at the Ataköy Marina for nearly an hour, during which she engaged with passengers aboard the boat docked besides hers, which just happened to be Russel Crowes yacht.

Known for her tumultuous love life just as much as her mega hits "Umbrella," "Disturbia," "Rude Boy" and "Diamonds," Rihanna did not disappoint last night with a performance laden with dazzling dance moves and laser shows, despite getting a late start. At one point Rihanna jumped down from the stage and performed in the crowd, winning the hearts of her Istanbul fans in what was her second concert in Turkey. Rihanna's first performance in Istanbul was on June 3, 2010 for her Last Girl on Earth Tour.