Istanbul Jazz Festival kicks off with a performance by Alicia Keys 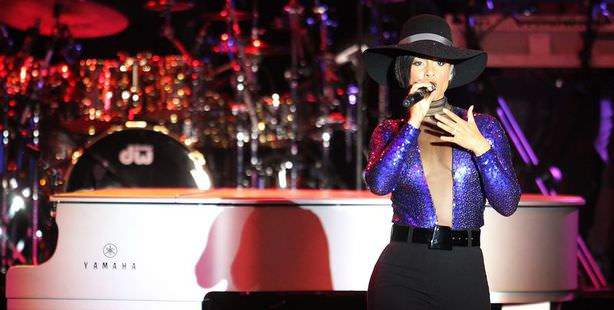 The Istanbul Foundation for Culture and Arts (İKSV) will be continuing the 20-year tradition of hosting the Istanbul Jazz Festival, held in July every year since 1994.

From July 2-18, the Istanbul Jazz Festival will be hosting famous greats of the jazz world as well as a number of acclaimed international pop, rock, folk and world music artists. Garanti Bank, which has been sponsoring the event for 16 years in a row, will continue the tradition this summer.

The Istanbul Jazz Festival kicks off on July 2 with Alicia Keys' first-ever concert in Turkey. The following is a brief glance at some of the colorful variety of performances that will be on offer next week.

Alicia Keys will be performing the opening concert for the 20th annual Istanbul Jazz Festival as well as her first-ever performance in Turkey. The 14-time Grammy winner, singer, composer and songwriter who is regularly considered to be one of the greatest living R&B and soul vocalists of our time, Alicia Keys comes to Turkey as part of her "Set The World On Fire".

Keys began playing piano at the age of 11. Her first album, released in 2001 and entitled "Songs in A Minor" sold over 40 million copies, making Keys one of the highest selling female musicians. Selected by Billboard magazine as the best R&B performer of the decade, Keys' music blends the piano with jazz, R&B and soul. Keys is also known for her efforts assisting with AIDS organization and is the global ambassador for the Keep A Child Alive foundation, which provides support for families in Africa and India that have been affected by the AIDS virus.

Change in venue: The venue for the first concert of this year's festival has been switched from KüçükÇiftlik Park to ParkOrman. Tickets purchased prior to the change in venue which was due to logistics, will be valid for ParkOrman.

One of the finest jazz vocalists of our time, Dee Dee Bridgewater will be sharing the stage with master jazz pianist and composer Ramsey Lewis on Wednesday, July 3 at 21:00 at the Yıldız Sarayı Hasbahçe. In this concert, three-time Grammy winner and owner of seven gold records, Lewis will be performing his flawless melodies for Bridgewater who with her silky voice and elegant style gives a new perspective on jazz standards. Widely considered to be the successor to vocal legends such as Dinah Washington and Sarah Vaughan, Dee Dee Bridgewater's energy on stage makes her one of the most entertaining performers to watch in the history of jazz.

One of Cuba's leading pianists Ernàn Lòpez-Nussa will be accompanied by his family of musicians for a special performance at Ortaköy's Feriye Restaurant on Wednesday that is being sponsored by DHL Express.

One of the most admired pianists in Cuban jazz, Ernàn Lòpez-Nussa will be joined by drummer Ruy Lòpez-Nussa and his sons and composer Harold Lopez-Nussa and Ruy Lopez-Nussa, and also Felipe Cabrera. Known for their dynamic performances, the Lopez-Nussa Family Project extends their musical scale to beyond jazz and Latin in their collaborations with other artists.

Considered to be the new superstar of British jazz, singer, pianist and songwriter Anthony Strong will play his optimistic tunes and lively vibes for Istanbul fans on Thursday, July 4th at one of this year's festival's new venues the Austrian Cultural Office Garden located in the Austrian Embassy.
Hailing from London, Anthony Strong's EP release in 2011 entitled Delovely took him to the top of the U.K. charts. Strong then gained wide international recognition with the follow-up singles "Cheek of Cheek" and "For Once In My Life." His album "Stepping Out" was released in 2013.

A performance series entitled "European Jazz Club" which will join Turkey's most successfully jazz performers on stage with European masters will take place throughout the duration of the Istanbul Jazz Festival and will be held at 22:30. On Thursday, July 4, jazz pianist Uraz Kıvaner and his quintet will be joined by trumpeter Marco Tamburini, a master musician who has recorded ten albums and shared the stage with the likes of Pavarotti, George Michael and Grace Jones.

Her crystalline and magical voice makes you forget time and space... Vocalist, songwriter, musician Melody Gardot performs at the Istanbul Jazz Festival on Friday night, July 5. Born in the U.S. in 1985; Gardot's music ranges from jazz and blues to country and folk. Gaining huge recognition with her three albums and impeccable rendition of her hits such as "Baby I'm A Fool," "Your Heart Is as Black as Night" and "If the Stars Were Mine," Gardot tends to emulate the style of Brazilian legends and with her vocals and beauty alike, has garnered a wide following worldwide.

Where can I buy tickets?

Tickets for the 20th Istanbul Jazz Festival are on sale by BİLETİX as well as the İKSV entrance ticket booth (open every day except Sunday between 10:00-18:00).

Tickets for Alicia Keys' concert are also obtainable through Garanti Bank ATMs. Lale Kart members are eligible for a 25% discount for all events performed in the festival as well as for any İKSV event.