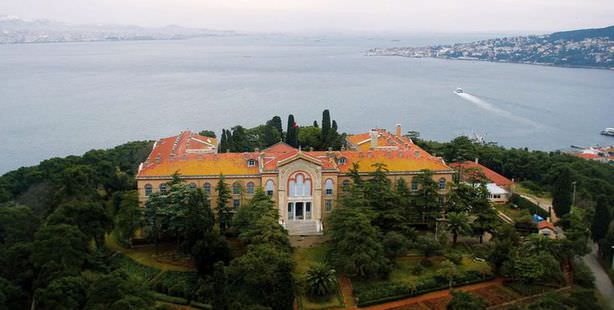 This Sunday, the historical Halki Greek Orthodox Seminary on Istanbul’s Heybeliada Island opens its doors after 42 years for a very special joint performance by Turkish and Greek musicians.

Closed in 1971, for years there has been debate regarding the reopening of the Halki Greek Orthodox Seminary on Heybeliada Island. After years of diplomatic tension between Turkey and Greece on the reopening of the clerical school, on Sunday the Halki Seminary opens its doors, but not to students, instead for a very special performance by Turkish and Greek musicians. The event entitled "A cultural journey from Greece to Turkey" will bring a select number of Turkish and Greek musicians together to perform on the same stage.

From Turkey, Mustafa Doğan Dikman and Engin Arslan will join a number of Greek musicians including Eleni Tsaligopoulou, Kostas Thomaidis and Vassiliki Papageorgiou, the latter who now resides on the island. Pianist Yorgos Andreu and clarinetist Manos Ahalinotopulos will be arriving from Greece to perform at this very special concert. In addition, the evening's performance will include the 'Bosphorus' orchestra of traditional Ottoman music and the 'Thanasis Tsipinakis' orchestra led by conductor Stathis Soulis. Fener Rum Patriarch Bartholomeos will be in attendance as will Bulgarian Orthodox Church Patriarch Neofit, who visits Istanbul over the weekend. The concert will begin at 18:30 on Sunday, September 22, following a religious music symposium held on the island.

The Halki Seminary was opened as a clerical school aimed to protect religious unity amongst the Christian Orthodox in 1844 and then closed its doors in 1971. There has been widespread anticipation of its reopening as part of a democracy package to be released by the Turkish government; however, a recent statement by Deputy Prime Minister Bülent Arınç alluded to the necessity to work on certain grounds, including reciprocity issues between the two countries before it can begin functioning once again. In 2010, the Halki Seminary opened briefly to host an art exhibition.