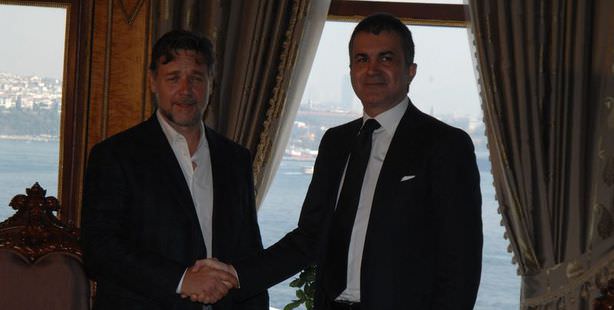 Russell Crowe arrived to Turkey last week to scout locations for his new film “The Water Diviner” which tackles the subject of the Battle of Gallipoli. This was the internationally actor’s third trip to Turkey, during which he visited Edirne, Cappadocia, Fethiye and Istanbul and was hosted by Culture and Tourism Minister Ömer Çelik for a meeting held at Topkapi Palace.

Russell Crowe recently paid a visit to Turkey where he visited towns and villages in Edirne, Cappadocia and Fethiye as well as Istanbul to scout locations for the filming of his new movie "The Water Diviner", which will be set in 1916 to the time of the Battle of Gallipoli. As part of his trip, Crowe held a meeting with Culture and Tourism Minister Ömer Çelik at Topkapi Palace during which he said that Turkey mesmerizes him. "This is my third trip to Turkey. I really love this country, it has always mesmerized me." Explaining that he toured sites in Edirne, Fethiye and Cappadocia, Crowe also said that he will be requesting assistance in tracking down certain actors in Turkey to take part in the film.
Tourism Minister Çelik pointed out that Crowe's film will address the shared history of a number of nations and said, "They are in Turkey to shoot a film about the Anzacs who fought here. Of course, this film's scenario is significant in terms of displaying the crossroads of a number of nation's shared fate. As you know, every year we hold a ceremony for the Anzacs in Turkey. We show our respect to the Anzac soldiers who came here from very distant lands and lost their lives."
Çelik referred to a famous speech by Ataturk made in 1934 in which he addresses the mothers of the Anzac soldiers who died in battle. In the address, Atatürk states, "Heroes who shed their blood and lost their lives! You are now lying in the soil of a friendly country. Therefore, rest in peace. There is no difference between the Johnnies and Mehmets to us where they lie side by side here in this country of ours. You, the mothers, who sent their sons from far away countries wipe away your tears; your sons are now lying in our bosom and are in peace. After having lost their lives on this land they have become our sons as well."

Referring to the film, which tells the story of an Australian, father who comes to Turkey in 1916 to seek out his two sons that have gone missing in action, Çelik said that the script is reminiscent of Ataturk's speech. "We see this as being an important project in terms of telling a story shared by nations," said Celik.

During his time in Istanbul, Russell Crowe tweeted a comical message containing a photo of a snail and the quote "This fellow moves faster than Istanbul traffic... much faster."

The famous actor also shared a photograph on Twitter to his 250,000 followers of a carpet he purchased from a store in Istanbul's Nuruosmaniye district, which said, "It was love at first sight."

On Crowe's last night before departing on Thursday, he hosted a dinner at the Italian restaurant Nostra Casa in Sultanahmet. Crowe had the restaurant serve up dishes using sauces he had prepared himself in the kitchen of the hotel he was staying at. The dinner, which consisted of Turkish and Italian dishes, was appreciated by his 30-person group of guests and Crowe was visibly pleased to be gifted a Turkish and Ottoman cookbook by the restaurant's authorities.