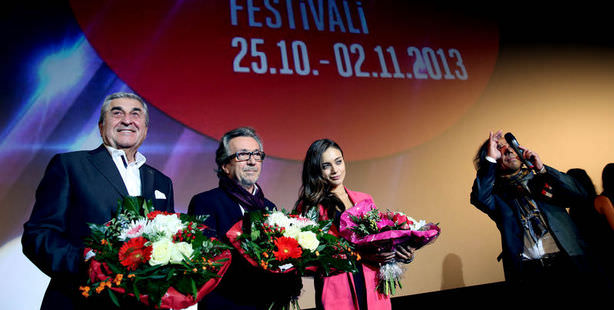 The 13th Frankfurt Turkish Film Festival, which runs from October 25 to November 2, comes to a wrap today with a closing party to be held in Frankfurt’s Zoo Palais.

The 13th Frankfurt Turkish Film Festival kicked off on October 25 with an 'opening gala' that included a showing of Osman Sınav's A Long Story (Uzun Hikaye) as well as musical performances by Şevval Sam and Kerem Görsev. Since then, the festival has hosted over 40 films divided into separate categories, has hosted an exhibit of images of Istanbul taken by photographer Katerina İvanisevic and also put on a number of showings for Turkish native convicts at Frankfurt's Preungesheim Penitentiary.

In an address at the festival's opening, Turkey's Consul-General in Frankfurt Ufuk Ekici stated that not only did bringing Turkish films to Germany help promote Turkish language speaking amongst first generation Turkish immigrants, but the festival also provides the opportunity for an introduction to Turkish culture. "Films relay other cultures to people. We also have the opportunity to get to know people through films. This festival provides a great contribution to integration and harmony in Frankfurt, which is a city which hosts residents from 160 different nations."

Frankfurt Mayor Peter Feldman also expressed the importance of Frankfurt hosting this festival, which he said was a valued opportunity and one he hopes they continue for many years to come. Highlighting that the festival aims to create an intercultural environment, Festival Coordinator Hüseyin Sıtkı stated, "This festival presents important diversity for Frankfurt's cultural life."

Tonight's closing party will feature a series of musical performances as well as sets by DJ Halil Vergin.