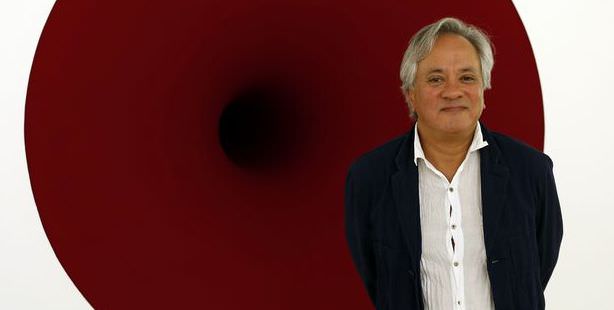 For his first major show in Turkey, famed Indian-born British sculptor Anish Kapoor brought huge works that have never before been exhibited to a gallery that ripped down walls to accommodate him.

Kapoor told, "More than half of this work hasn't been shown before, perhaps because they needed time to gestate. It takes time to allow the language a full voice."

The exhibition, which has attracted almost 100,000 visitors since it opened in September, has been extended into February.

The limestone "Dragon" (1992) was made about the same time as Kapoor's untitled 1991 Turner prize work and features the same rich blue pigment.

Since then, the London-based artist has become a fixture of art in the public sphere, with a host of commissions across the globe, including this year's sensational "Ark Nova," a purple, mobile, inflatable concert hall for tsunami-hit Japan.

Kapoor added, "All of the orthodoxies of how art is made and how it should operate are less meaningful than they have been. It is possible to dive into the so-called traditional and find new space."

The 33 pieces in "Anish Kapoor in Istanbul" come from his private stone yard situated amid the railway arches of south London where, over the years, he and his team have chipped and polished hundreds of tons of alabaster, granite and rock.

"It is very relevant in this city of fantastic stones from history," Rosenthal said at the opening. "One is never quite sure how old Anish's sculpture is. It's obviously of this time, but it could just as well be historical."

Another reason Kapoor waited to show the stone work was the challenge of finding the right interior space to mount an installation comprised of such large, heavy pieces.

"The tradition has been that stone sculpture gets shown outside. But in my mind, even if it's big, it loses its scale so I wanted to show these inside," he said.

Rosenthal added the Sabancı, a former villa with a cavernous, underground annex at its Bosphorous Strait location, was more accommodating than Western peers in meeting the exhibit's particular needs, which included ripping out lampposts and tearing down walls.

"Most institutions like to say 'no', they like to say that things are impossible. One of the most beautiful things at this museum - and I hope it's a paradigm for the country - is that people try to say 'yes'," Rosenthal said.

Previous exhibits at the Sabanci, which opened in 2002, include Picasso, Rodin and Monet, and the museum is a key player in making Istanbul one of Europe's most dynamic art scenes.

Despite their imposing stature, Kapoor's stone work has an intimacy not associated with the monuments for which he is best known today.

Those include "Cloud Gate" (2006), the massive chrome form that Chicagoans have lovingly dubbed the "Bean", or the red, steel-framed "ArcelorMittal Orbit" (2012) viewing tower that dominates London's Olympic complex.

"The question is, can we reinvent spaces and traditions to make public art meaningful?" Kapoor said at the opening.

"My answer is yes. It has been proved. 'Cloud Gate' has this constant draw of people around it. So there is a way, we just have to be properly, dynamically contemporary about it."