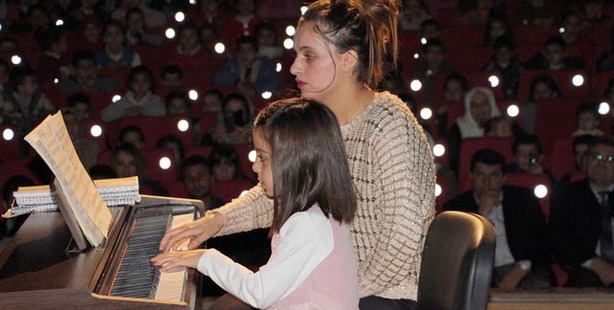 The Şırnak province in Turkey’s Southeast, once plagued with terrorism, now hosts piano recitals by young residents of the city.

Akiset Atan, a Şırnak native and music school graduate, trained 30 children in Şırnak, aged between six and 13 for three months on the piano. The local project is organized by a local NGO in collaboration with a government institution. Children completed the piano course with a ceremony in which they performed along with Atan.

The young musicians performed classical pieces to an overcrowded audience at the Şırnak Culture Center.
Atan said they dedicated their concert to the child victims of the Syrian civil war. She praised the performance of her students, who only received brief training.
When asked what she thought of the performance, one of the children who performed at the event replied, "It was beautiful. I had fun and felt great." Zeynep Sevinti, who performed Vivaldi's Spring said she felt happy when the audience applauded them.

Şırnak, along with other cities in the Southeast and East of Turkey, has long been beset by terrorism and the clashes between Turkish security forces and the Kurdish Workers' Party (PKK), a terrorist organization. Last year, the Turkish government initiated the "Peace Process", a series of reforms to end the long-standing conflict with the Kurds. The process was followed by PKK's announcement of withdrawal from the Turkish border. Since then, with virtually no single terror attack, the region revels in an atmosphere of peace.

Children, once forcefully recruited by PKK for street riots, are now able to pursue education and take part in cultural activities.