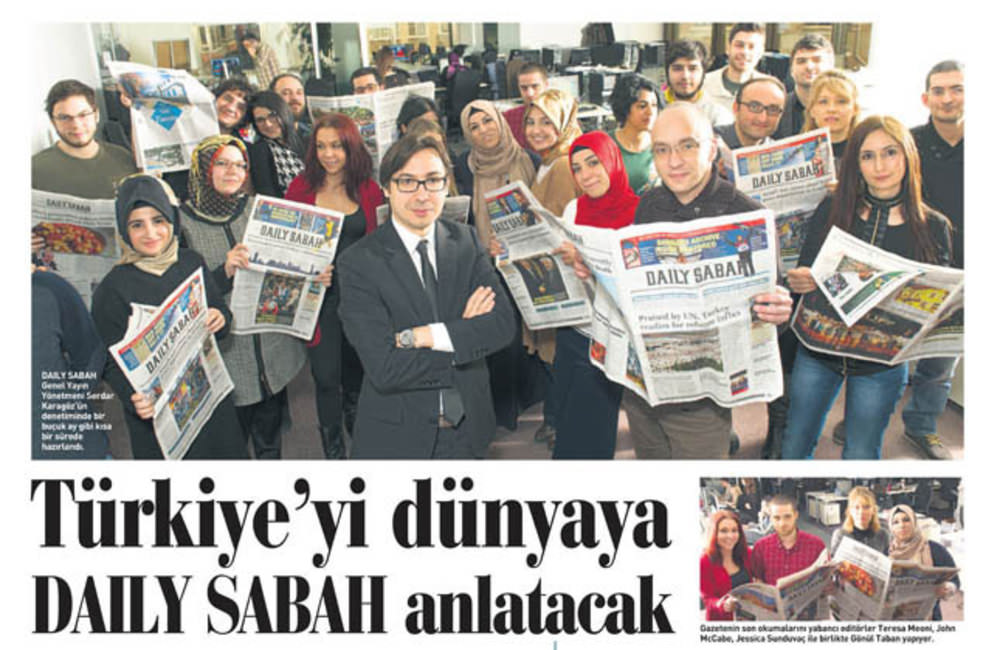 by Mar 02, 2014 12:00 am
(Daily Sabah) Turkey's Sabah introduces its sister newspaper Daily Sabah to its readers on its weekend edition (original news in Turkish). The Editor in Chief Serdar Karagöz, announced the newspaper as a new English paper that provides a fresh outlook on to local and global affairs.

Coming out only after a month and a half since the onset of the project, Daily Sabah went to print on February 24. Creating the
team from candidates in Turkey and from abroad, Karagöz describes the Daily Sabah family as a "very compatible new media that
produces dynamic and high quality news."

With experience in various news channels and newspapers including the New York Times, Karagöz says the newspaper targets specific readers including "expats living in Turkey and foreigners interested in Turkish affairs". Since there is only a few English news outlets for foreigners located in Turkey, Daily Sabah is ready to present itself as a pioneering newspaper."

Adding the new English newspaper will "depict a more clear understanding of global affairs from a Turkish point of view."
With Turkeys complex political structure, including a conservative reformist government battling against a leftist group that
resists change, Serdar Karagöz is committed on providing clear and unequivocal information without distorting facts. Outlining Daily Sabah's character as a reference point for local and global audience, Karagöz gives great importance to the website and social media saying its a "direct way of reaching out to the readers."

Turkey's third English publishing Daily Sabah is printed for 6 days a week, includes 16 pages on weekdays and 20 pages on the weekend editions. The newspaper debuts with a brand new publishing style, including intellectuals on its "Opinion" pages, interaction with readers allowing them to raise their opinions, comments and feedbacks on all issues. Its Sports page covers not only football but also other sports ranging from tennis to golf. With its interactive point of view Daily Sabah attaches news-related-Tweets from Twitter users. Also the newspaper has a special section on the back page where Instagram photographs are tagged using #dailysabah.