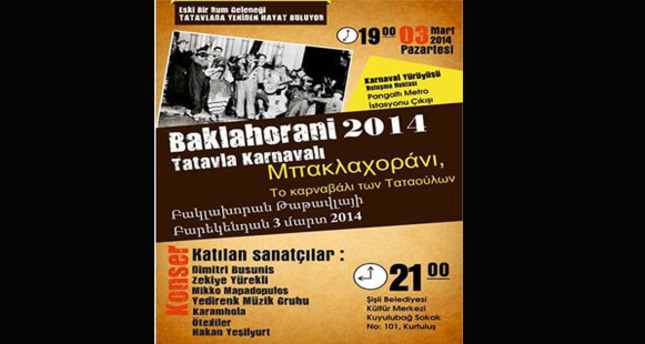 Hundreds of people in costumes, musicians and public will assemble in the Kurtulus neighborhood of Istanbul today to celebrate the fourth Tatavla Baklahorani Carnival of modern times

Istanbul (Daily Sabah) - 500-year-old Greek festival 'Baklahorani' begins in Istanbul. Kurtulus, known as Tatavla in Greek, will play host to the colorful, multi-cultural, multireligious "Baklahorani 2014 Tatavla Carnival" for the fourth time this year since it was banned in the 1940s.

Sisli's old Greek neighborhood, Kurtulus, will be flooded with hundreds of people who want to experience Tatavla, starting with the parade today at 07:00 p.m. at Pangaltı Metro Station. After the parade artists, musicians and performers including Dimitri Busunis, Zekiye Yürekli, Mikka Mapadopulos, Yedirenk, Kerembola, Ötekiler ve Hakan Yesilyurt will perform at the Sisli Municipality's Culture Center.

For almost five centuries, local Greek communities in Istanbul took part in Tatavla, which marks Christians' entry into the 40-day Lenten period with colorful events including parades and public and private parties. Nearly 70 years after the last celebration, the festival was revived in 2010, when the streets of Sisli were filled with people who sang, paraded and danced.

This was all thanks to Hüseyin Irmak, a researcher born and raised in Tatavla and Haris Theodorelis Rigas, a Greek who chose to live in Istanbul and earns his living playing music in taverns. The organizers wanted to bring back the festival to offer the chance to discover Turkey's multicultural past and traditions.

During the early 19th century, locals celebrated with masked parades and crowds would gather in the elite district of Pera in Istanbul's Beyoglu district before they headed down to Tatavla. The biggest celebrations took place in the main square in front of the historic Hagia Dimitri Church. Although the event was started mainly by local Greeks, it soon evolved into a festival bringing together people from various neighborhoods and from various religious, ethnic and cultural backgrounds. The carnival reached its peak around World War I, however it was banned in the 1940s by former Turkish Prime Minister Ismet Inönü.

Tatavla, which means "Horse Stable" in Greek, was the epicenter of the celebration. The neighborhood was also where "Rembetico," the music created by those who had to migrate to Greece from Istanbul and Anatolia during the population exchange between Turkey and Greek emerged.