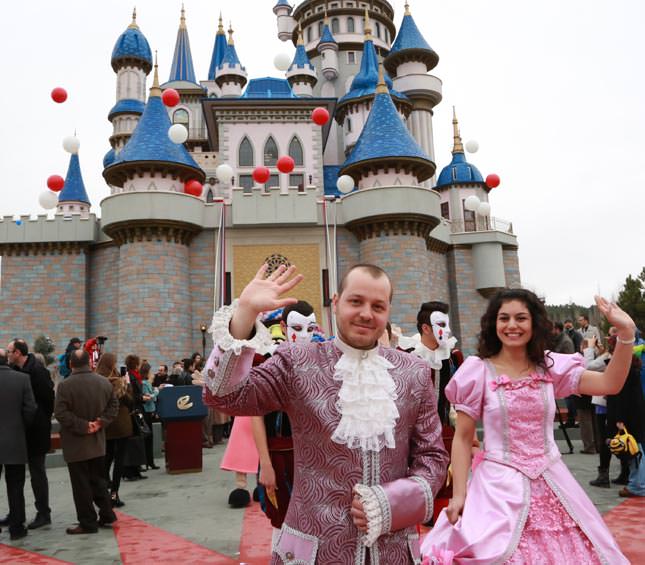 With "Masal Şatosu" finally opening its doors and the capital's Ankapark project scheduled to open later this month, competition between the two cities looks fierce

Istanbul - Inspired by 26 towers and minarets from various regions in Turkey, "Masal Şatosu" was built in Eskişehir to gather children from all ages together and offer them the chance to spend a day in fairyland together with their favorite fairlytale heroes. Construction began in 2011 and as the time neared, children from Eskişehir and all around Turkey grew increasingly excited.

The castle is located within the Sazova Science, Arts and Culture Park. "Masal Şatosu" has different sections such as the fairy-tale rooms of King Midas, Nasreddin, Keloğlan (Bald Boy) and Tepegöz (legendary creature) and "Dada Gorgud." Shops within the castle offer families the chance to buy their children's favorite toys. Moreover, there are games, play groups and playgrounds offering various activities.

The Science, Arts and Culture Park is Eskişehir's biggest park with an area of 400,000 square meters. Along with restaurants, there is an open air amphitheater with a 2,000 person capacity and a big pond for various water sports.

Furthermore, a life-size replica of Santa Maria Ship with which Columbus discovered America is a major attraction for kids. The Science Center Project is also located in the park and offers opportunities for primary and secondary school children to undertake scientific experiments in real environments.

The park boasts a planetarium, where both children and grown-ups can watch the sky and the magical atmosphere of outer space. However, Eskişehir might soon be outrun by Turkey's capital, Ankara; with the new Ankapark project scheduled to open later this month. It seems like Eskişehir and Ankara, only two hours apart, will be competing to become Turkey's biggest amusement centers.

Plans for the Ankapark project have emerged, revealing a largescale project with a high chance of making it into the Guinness Book of World Records. A 70-meter-tall dinosaur, a Universal Studio Cinema System and a roller coaster that will be one of the largest in Turkey and the Middle East are just a few of the attractions included in the project's plans. The park will be built on an area of over 2 million square meters, lying parallel to Istanbul highway at 4.2 kilometers long. The park will offer 2,117 unique attractions and rides. Created and constructed by Ankara Metropolitan Municipality's Directorate of Technical Works, the park will offer 14 roller coaster rides. A 75-meter-high "free fall tower" in the Theme Park area will definitely become one of the park's greatest attractions, particularly for adrenaline junkies.
A floating cinema suspended 30 meters in the air will also be included in the park and will offer screenings on a 160 degree round, metal screen. Jet Ski Coaster Ankara, a rafting area built on 10,000 square meters will be constructed on a giant pond.

Aside from these outdoor areas, a closed steel construction tent built on 70,000 square meters, which can be opened in the summer, will offer three main attractions. The dinosaur group will include a dinosaur playground, cinema, restaurant and a dinosaur forest and museum.

The children's playground built on 20,000 square meters will include various state-of-the-art arcade games for children, plus an aqua park. Last but not least, the park also has something to offer adults with an adult group entertainment field built on 30,000 square meters, offering a laser paintball field, a digital game tent and an auto-robot tent. Ankapark will also include a 940,000-square-meter-wide Natural Life Park, separated into "continents."

The Natural Life Park will have the first safari area in Turkey and aims to welcome various unique animals previously not found at any other Turkish zoo.