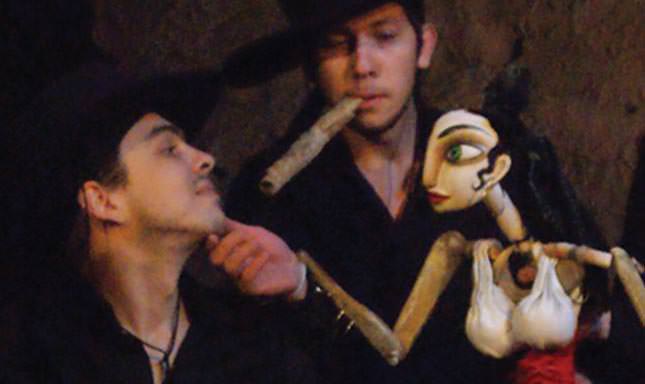 The İzmir International Puppet Days kicked off last week, featuring shows for young and old alike. The festival, hosting 40 troupes, is expected to be visited by 60,000 people and will continue until March 23

The eighth İzmir International Puppet Days is in full swing, featuring 40 puppet theaters from 20 different countries that will perform 42 shows at 27 different venues. Over 60,000 people are expected to attend the event, which will include performances in Selçuk and the beautiful coastal town of Marmaris from March 6-23. The Biting Breads from Germany, Valeria Guglietti from Argentina, Belgium's Theatre Du Sursaut, various theaters from Bulgaria, Karromato from the Czech Republic, Compania De Marionetas Herta Frankel, Joan Baixas, El Theatre De L'Home Dibuixat from France, Matija Solce, Lutkovno Gledalisce Maribor, along with Turkey's Ali Poyrazoğlu Theater and Balon Puppet Theater are among the many attendees.

A highlight of this year's festival will be an exhibition displaying the puppet collection of Zlatko Bourek, the famous Croatian director, script writer, designer and caricaturist. The original collection is housed in the Ljubljana Puppet Theater of Slovenia.

In a first for both Turkey and İzmir, a site-specific puppet show "Angels of the Chimney" will be staged in İzmir's old coal and gas factory, reviving an art concept that started in the 1960s, taking modern art out of exhibition halls, museums and galleries and performing it in site-specific environments. The directors of the play are American theater artists Sara Brown and Adam Yakin, who are famous for their site-specific performances staged around the world. The show will be staged free of charge on March 21 and 22. For those looking for a more hands-on experience, workshops will also be held by Argentinean, Irish, Israeli and Canadian artists.

If you are looking to get away from the stage, Serdar Sönmemiş's photography exhibition at the İzmir Painting and Sculpture Museum Kültürpark Art Gallery, "Puppets through the Eyes of a Photographer" is a good option. Another event at the festival not to be missed is "Carmen," which will be performed by Russia's Vologda Regional Puppet Theater. The director of this year's exhibition, Selçuk Dinçer said, "All European festivals are trying to attract this group. It is the Carmen opera that we know, but with puppets. It is one of the best performances for adults."

Dinçer noted that the İzmir festival has become one of the two largest puppet exhibitions in the world and that in an effort to overcome the notion that puppet shows are only meant for children, organizers have worked to put together a rich and diverse program appealing to all age groups. "We aim to put on large-scale productions that will contribute to the art of puppetry in İzmir. Hopefully, with our efforts and the support of the public, İzmir will become a worldbrand in puppet shows and festivals," said Dinçer.

More information on the festival and the schedule can be found at: