Şanliurfa to get biggest museum 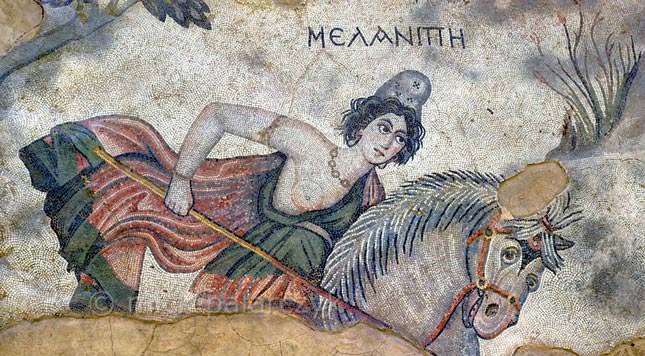 The country's biggest museum complex, to be opened in June in the southeastern city of Şanliurfa, will house priceless mosaics uncovered in the region of an Amazon princes as well as other cultural facilities

Istanbul - Built on a field of 200,000 square meters in Şanlıurfa, the Haleplibahçe Museum Complex will house 70,000 historical artifacts and include an Archeopark, the Edessa Mosaic Museum and an archeology museum, as well as various other parks, hiking trails and amphitheaters. Construction is currently in progress and the complex is scheduled to open in June. "We pay attention and take extreme precautions while transferring all archeological artifacts and artworks in storage boxes as they are extremely valuable and crucial," said Müslüm Ercan, the museum director in Şanlıurfa.

He explained that a special team of archeologists and restoration experts was charged with the packing process of each of the pieces. "We pay attention to deliver the artifacts in storage boxes.

The number of pieces to be transferred changes in accordance with the shape of the boxes," said Ercan. According to Ercan, 2,500 storage boxes and Styrofoam containers, along with hundreds of meters of bubble wrap, have been purchased. "After the wrapping and packaging process, we take five or six photos of each artifact to check their status before and after the transfer. The artifacts are being packaged rapidly but carefully," said Ercan.

Upon receiving the official consent of the General Directorate for Cultural Heritage and Museums, the preparation for the extensive complex began and allowed for the transfer of the artifacts.

The Şanlıurfa Museum, located near the site of the new museum, is currently closed to visitors to allow its staff to be dedicated to the preparation of the new museum. Regarded as one the most prestigious and important projects to enhance Turkey's cultural scene by the Ministry of Culture and Tourism, Şanlıurfa was chosen as the project location because of the city's ancient history dating back to the fourth century B.C. and is an important religious site, along with Mecca, Medina and Jerusalem.

An area of 60,000 square meters has been reserved for the Şanlıurfa Archeology Museum, which will be 12 times the size of the current museum and built on three floors. The extensive space will necessitate visitors taking time to view all the artifacts and artworks.

The Edessa Mosaic Museum, built on 10,000 square meters, will display a mosaic portraying an Amazon warrior queen, the first discovery of the figure on mosaic. According to experts, the Amazon mosaics are some of the finest examples of mosaic art in Euphrates basin.

Priceless mosaics found by coincidence during excavations in the area in 2007 will also be on display. Known as the Haleplibahçe mosaics, the artwork dates back to the ancient Seljuk Seleucid dynasty, located in the region after Alexander the Great's conquest of the city of Edessa, found close to what is today Şanlıurfa. About 100 square meters of mosaics were unearthed under the supervision of the Şanlıurf Archeolgy Museum. In between the Şanlıurfa Archeology Museum and the Edessa Mosaic Museum, an Archeopark will be built. Visitors will also be able to enjoy the nearby Şanlıurfa Fortress and the Balıklıgöl, two local attractions in Şanlıurfa.

Ercan also emphasized works for accommodation facilities are underway since the project is expected to draw many more tourists to Şanlıurfa, which already is a highly popular culture tourism destination. Ahmet Eşref Fakıbaba, the mayor of Şanlıurfa, said during the groundbreaking ceremony in 2013 that what makes cities unique is their museums and cultural investments. "In five years, everyone will be talking about Haleplibahçe," he said.

Minister of Labor and Social Security Faruk Çelik and the Minister of Culture and Tourism, Ömer Çelik, are also closely involved in the project.