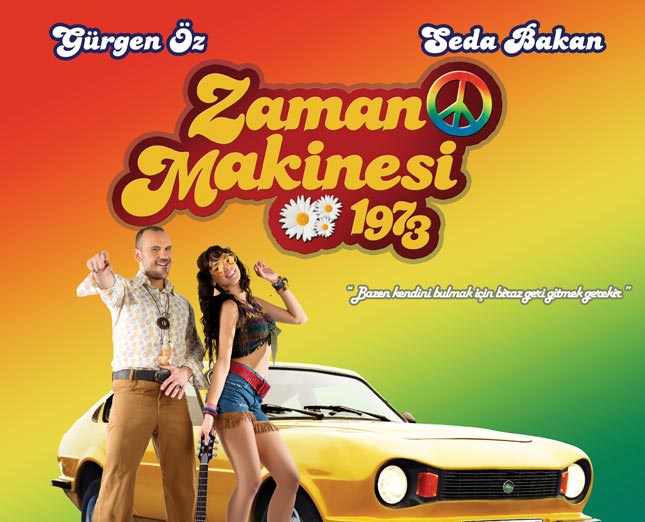 ISTANBUL – Director Aram Gülyüz's 140th film "Zaman Makinesi 1973" (Time Machine 1973) featuring the first-ever Turkish sports car, the Anadol STC, will be out March 14. The film depicts the story of a young man who travels back in time with the Anadol STC he inherited from his late father.

Legendary director Aram Gülyüz, known for his contributions to "Yeşilçam," or Turkey's Hollywood, is releasing his 140th film, "Zaman Makinesi 1973" (Time Machine 1973) tomorrow. The film, which stars Gürgen Öz and Seda Bakan, follows the story of a rich and spoiled young man travelling back to the year 1973. Zihni Göktay, Fatih Koyunoğlu, Gülhan Tekin and Mustafa Uzunyılmaz also appear in the film.

Öz plays Tolga, the main character who develops an emotional bond with an old Anadol STC 16 he inherits after his father's death. Resenting the fact that his father left all other assets to his mother, Tolga gets in the car in order to get away but in- stead he finds himself high up in the sky and after a long soar lands on a beach. Clueless that people around him are wearing clothes that do not really belong to the 2010s, he starts looking for a car mechanic and finally runs into Kadir Usta, played by Mustafa Uzunyılmaz.

Kadir Usta, the mechanic, thinks Tolga is a looney from his clothes, his manners and the way he speaks. When Tolga realizes that he is in 1973, he is both shocked and thrilled to be back in the generation of 68. In a state of shock, he starts searching for ways to get back to 2010s, until he meets Yasemin, , the girl of Tolga's dreams, who lives in 1973.

The film telling a rarely told story of time travel and the generation of 68 in Turkish Cinema is directed by a veteran hard working Turkish director. Gülyüz has worked with numerous Turkish movie stars including Ajda Pekkan, Ayhan Işık, Türkan Şoray and Metin Akpınar and has many comedy shows such as Tatlı Kaçıklar and Yasemince for the TV. Being the first director in the world to ever adapt a Red Kit comic book to cinema, Aram has been shooting films since 1958. The scriptwriter of "Zaman Makinesi 1973" is also a very well-known name in Turkish humor world. Kemal Kenan Ergen, has worked for many years in renowned humor magazines in Turkey such as Gırgır, Limon, Leman and Lombak. The score for the film has been composed and sung by Gökalp Ergen, who worked on other Turkish movie soundtracks such as "Kolpaçino." Ergen, who was also a member of the Turkish Heavy Metal Band Pentagram, also released two albums with the band, The Climb. The cover songs in the movies's soundtrack are also performed by Ergen. The movie is also reviving a collectible, "the Anadol", which has a very special place in the hearts of Turkish car collectors. The first sports car produced in Turkey, the prototype for Anadol STC-16 was developed in 1972. Designed by Eralp Noyan, only 176 cars were manufactured between 1973 and 1975. It was an upmarket automobile in yellow and represented the country in rallies. STC stands for "Sport Touring Coupe," and was nicknamed "Süper Türk Canavar"(Super Turkish Monster) by the youth of its time. The car used in the movie, aka, the time machine of "Time Machine 1973" was rented from Bülent Aydın, the owner of Classical Automobile Magazine and specially protected throughout the shooting. Scenes where the car falls of a cliff and falls into the sea were filmed by using special effects. "Zaman Makines 1973"s gala was held on Wednesday and the movie is released today in cinemas all around Turkey.