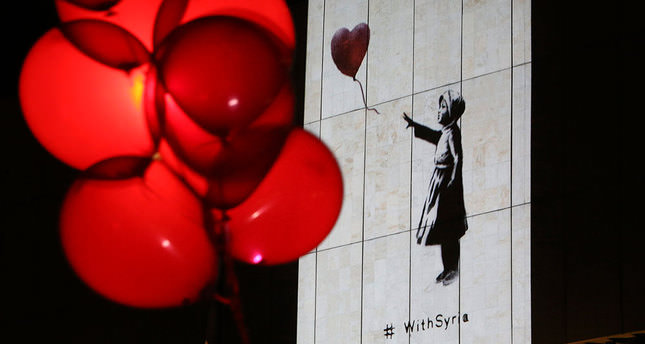 by Özlem Sakin Mar 16, 2014 12:00 am
ISTANBUL – The war that began on March 15, 2011 was commemorated by people flying red balloons and the #WithSyria hashtag being projected onto Paris' Eiffel Tower and London's Nelson's Column. The graffiti artist earlier released a new version of his famous work showing a girl releasing a red balloon, which symbolizes hope and was first seen in London in 2002. The new image, showing a Syrian refugee girl wearing a head scarf, was released last week on the artist's website.

Along with the stencil, a statement on Banksy's website remembered the 15 children that were arrested for painting pro-democracy graffiti in March 2001 in Daraa, a town located in southwestern Syria, which triggered the first protests against the Assad regime.

The statement read: "On March 6, 2011 in the Syrian town of Daraa, 15 children were arrested and tortured for painting anti-authoritarian graffiti. The protests that followed their detention led to an outbreak of violence across the country that would see a domestic uprising transform into a civil war displacing 9.3 million people from their homes."

British actor Idris Elba also showed his support for the campaign and lent his voice to a video featuring music from famous British indie band Elbow's recently-released album, "The Take Off and Landing of Everything."

The video features Banksy's artwork depicting a girl floating with a red balloon as she watches the destruction below Syria's bombed-out landscape with dead bodies scattered on the streets and buildings in ruins. It highlights the fact that 95 percent of Syria's population is not combatants, yet half the population has been forced to flee the country. The flying girl in tears is slowly joined by millions of children, men and women who symbolize the hope for freedom and peace. The video ends with Elba's hopeful voice saying, "Will we let the people of Syria lose another year to bloodshed and suffering? Will you stand with Syria?"

Viewers are then directed to the charity's website, which features the video and asks supporters to promote the hashtag #WithSyria on Twitter and Instagram to show support and solidarity for the victims of the civil war.

Celebrities such as Edith Bowman, Peter Gabriel and David Milliband also joined and posted photos of themselves on Twitter and Instagram holding red balloons.

Although the main commemoration ceremonies took place on March 13, two days before the official starting date of the crisis, more local events were organized throughout the weekend.

Across 30 countries, thousands showed up with candles and red balloons to remember the millions who have fled their homes in fear and over 100,000 people who have lost their lives within the last three years of the 21st century's most atrocious civil war.

Red helium-filled balloons were released with messages of solidarity to recreate Banksy's work. Fiercely dedicated Syrian activists read the 100,000 names of Syrian victims of war outside the White House in Washington.

Over 130 humanitarian and human rights groups plus non-governmental organizations working for human rights from Amnesty International to Humanitarian Relief have supported the campaign and social networking sites are full of related images and messages.

The campaign calls upon like-minded people from across the globe to stand up with the millions who struggle every day to survive the civil war.

Banksy, a satirical street artist who combines dark humor with graffiti, has created various artistic works of political and social commentary on streets, walls, and bridges of cities throughout the world, including Israel's Separation Barrier, Guantanamo Bay detainment camp and various significant museums in Manhattan and London. Banksy displays his art on publicly visible surfaces and does not sell any photographs and reproductions of his street graffiti. However, art auctioneers have attempted to sell his art from their locations. Celebrities, including Angelina Jolie and Brad Pitt, are rumored to have paid millions of dollars for original artworks removed from their locations. Banksy's first film, "Exit Through the Gift Shop" made its debut at the 2010 Sundance Festival and was nominated for the Academy Award for Best Documentary in 2011. Although his identity is unknown, he was involved in the Bristol aerosol boom of the late 1980s and is supposedly born and raised in Bristol, England.