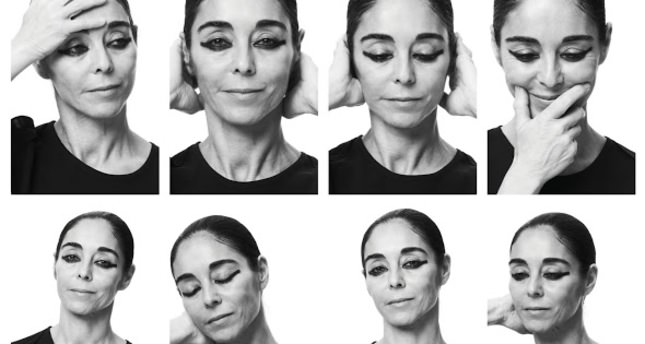 Praised by the Huffington Post as the artist of the decade and honored at the 2014 World Economic Forum with a Crystal award, Shirin Neshat continues to document the struggle for civil liberties with her latest exhibition focusing on the Egyptian Revolution

ISTANBUL — Iranian-born, California-raised Shirin Neshat's latest work, "Oud House is or Fire", features portraits depicting the vulnerability sense of defeat and exhaustion of Egyptians who have been left behind, along with indecipherable calligraphy, a signature of the artist.

In an interview with the Washington Post, Neshat said she had already been in Egypt to develop a film before Mubarak was ousted and then went back after the revolution.

"When the Rauschenberg Foundation commissioned me to do a project I just thought it would be really interesting to do a project in Egypt for a few reasons. One, Rauschenberg as an artist has a history of advocacy and Egypt itself has been deeply problematic in poverty and issues of women and children. It also happened to be in the aftermath of the revolution and you really felt an incredible sense of defeat among Egyptians," said Neshat.

The exhibition was showcased at the Rauschenberg Foundation's art space in Chelsea, New York until the beginning of this month. Twenty-three close-up photographs of isolated faces, feet and hands were on display at the exhibition. Faces of victims' families who had been left behind stare right into the eyes of the victim while calligraphy is painted over the skin, with feelings of loss overwhelming the viewer. The two photographs of feet are portrayed as if they are in a morgue with a tag attached to the toe and calligraphic text painted across the soles. The subjects in the photographs are all people the artist met on the streets of Egypt.

Before taking their photos, Neshat interviewed men and women on the streets through an interpreter and asked them to think about the loss they had suffered.

"It's the first time I have come this close to being a documentary artist, in a way that's really tapping into real human beings and real emotions, as opposed to fictional characters that try to play a role," she said in an interview.

The artist invites us to take a walk on the streets and see the destruction of the revolution. Although the whole world has observed the social and political side of the revolution, art brings out a viewer's primal emotions, the most important being compassion. The work is perhaps dark, but also offers beauty and spirituality in a paradoxical manner.

"This is my signature as an artist and it's also the signature of the Iranian people, [who are] so divided in their poetry and their politics. So the calligraphy for me and the inclusion of text in the image comes directly from [that] tradition. It's a way of adding a dimension about humanity, it's all of the positive things echoed into a concept that is extremely disturbing and dark," says Neshat on including text and calligraphy in her latest exhibition.

The proceeds of the exhibition are to be donated to a human and/or social rights initiative in Egypt chosen by the artist.

Born in Qazvin, Iran, Neshat left the country to study in Berkeley, California near the start of the Iranian revolution.

Neshat can be described as a visual artist in the widest sense of the term as she has produced works in photography, films and visual installation, all focusing on gender and politics.

Although she did not live through the Iranian revolution and apart from her early youth did not spend much of her life in Iran, she prefers to focus on women's issues in Iran and lately has taken a special interest in the Arab Spring. In her early career, she went back to Iran in 1993 and explored the concepts of exile and identity.

Toward the end of her teens, she focused more on video installations and took an interest in gender roles in society. Her break from photography came in the 2000s. She directed her first film, "Women without Men," which won the Venice Film Festival's Silver Lion award for Best Directing in 2009.

The film told the tale of women in Iran at the time of the 1953 coup.

She has previously received various awards, including the Golden Lion at the Venice Biennale (1999), the Hiroshima Freedom Prize (2005) and the Dorothy and Lillian Gish Prize (2006). On her latest triumph, winning the 2014 Crystal Award, annually given to artists who have contributed to improving the state of the world, she told the Washington Post: "This was one of the most meaningful experiences I've had in my artistic career. Very often, I talk about politics in my work but in an artist's community, people are distant from those issues. At Davos, I participated in a couple of panels where the audience was not from the art world. I felt like an oddball but to see that they were listening and were interested in the role of an artist was really meaningful to me."
Last Update: Apr 22, 2014 1:49 am
RELATED TOPICS