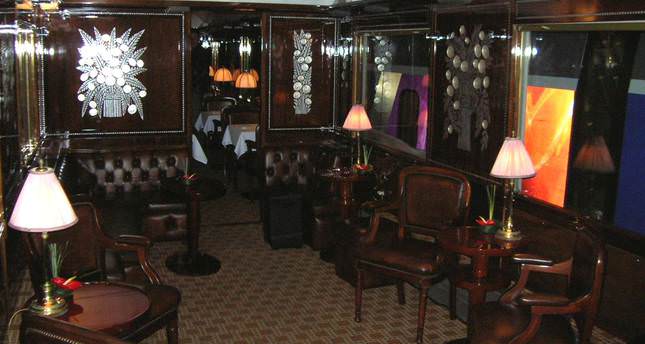 Legendary rail journeys on the Orient Express, which carried the rich and famous between Paris and Istanbul for well over a century, are remembered at an exhibition held in Paris

ISTANBUL — Paris' Arab World Institute and France's national rail operator have teamed up to restore the original Orient Express train in the center of Paris to mark the 130th year anniversary of the start of the legendary rail service. The exhibition, which launched on April 3, can be visited until Aug. 31. in Paris, after which it will move on to Venice, Istanbul, Vienna, Liège, Berlin, Lyon and London. The former French Minister of Culture, Jack Lang, President of France's national railway SNCF, Guillaume Pepy and French Minister of Foreign Affairs, Laurent Fabius were amongst the attendees at the official opening ceremony.

SNCF is planning to use the entrance fees of the exhibition to relaunch the service, which they want to initially run between Paris and Vienna but eventually expanded to Istanbul. The Orient Express, which was a home to Agatha Christie's Hercule Poirot's murder investigations and James Bond's fight with a double agent, defined luxurious travel back in its day and the head of SNCF's Orient Express unit, Patrick Ropert said "The idea is to create a cruise on rail tracks," according to The Wall Street Journal.

In order to give an augmented reality experience to the visitors, the exhibition offers the chance to walk along a replica station before boarding a real train comprising three carriages: Train Bleu, the famous carriage featured in "Murder on the Orient Express," which also contains the bar-restaurant, the Fleche d'Or (Golden Arrow), in addition to a saloon car and sleeping car.

The other part of the exhibition is built over 800 square meters and contains objects and photos that stand witness to the luxury of the time.
Visitors will enjoy the toilets and the vanity sink, the fancy dishes and silverware along with old posters, anecdotes and travel documents.

There are also other items for recalling some of the train's famous passengers such as famous writer and playwright Graham Green's typewriter. The exhibition also presents a slideshow containing images from the cities along the train's journey, which can be enjoyed in addition to the prerecorded conversations in Arabic. While visitors aren't allowed to sit and enjoy the atmosphere, for those willing to pay the fee, there are meals that served in the restaurant carriage after the show is closed for the day with food cooked by Michelin-starred chef Yannick Alleno. The Istanbul service of the Orient Express stopped in 1977 and its successor, the service running from Paris to Vienna stopped in 2007.

The last route started from Strasbourgh, and the service ran as "Euronight train number 469 'Orient Express'" until Dec. 12, 2009. After 126 years , on Dec. 13, 2009, the "Orient Express" name disappared from the European train timetables, but hopefully will soon be revived as SNCF is planning to use the entrance fees of the exhibition to relaunch the service, which they want to initially run between Paris and Vienna but eventually expanded to Istanbul.
RELATED TOPICS