Film fest ends with a bang 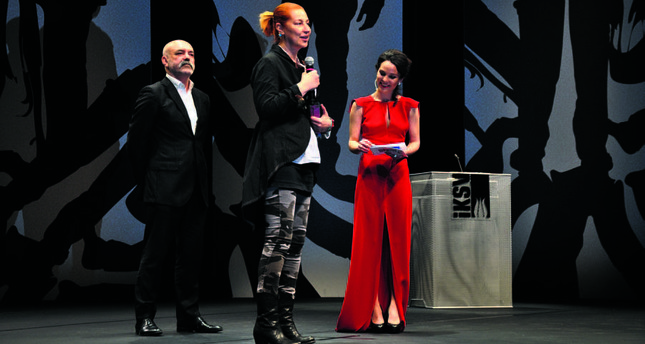 For cinephiles in Istanbul life stopped for the last 15 days and everything revolved around movies. Like all good things, the 33rd Istanbul Film Festival came to an end but our memories of the incredible film selection and Saturday's glittering award ceremony are still fresh

ISTANBUL — The awards for the 33rd Istanbul Film Festival organized by the Istanbul Foundation for Culture and Arts and sponsored by Akbank for the 10th time were presented on Saturday at the Cemal Reşit Rey Concert Hall. Daily Sabah was there to follow the excitement closely. Presented by Tülin Özen and aired live on CNN Turk, the ceremony welcomed some of the most prominent names in Turkish cinema, along with international directors, actors and producers. One of the most emotional moments of the night was the award presented to Giovanni Scognamillo, a critic, translator and historian, on his 85th birthday for his contribution to film history. The plaque was presented to the a veteran film historian on behalf of FIRRESCI by Alin Taşçıyan, the Turkish film critique who was recently promoted to president of the International Federation of Film Critics (FIPRESCI). Due to old age, Scognamillo appeared on stage in a wheel chair and delivered an emotional speech in Turkish thanking both the federation and the festival, but most of all film lovers around the world and especially in Turkey.

Along with Scognamillo, Marin Karmitz, the legendary producer and founder of the MK2 production company and movie theater chain dedicated to creating, distributing and screening independent films, was also presented with the Cinema Honorary Award by festival director Azize Tan.

"Blind," the directorial debut of Eskil Vogt, was announced as the winner of the International Golden Tulip Competition, whose jury is presided over by director Asghar Farhadi. The complex, humorous and original drama focuses on the question of how to show blindness on film. It follows the story of a female writer who retreats from society after losing her sight. The film is surreal in terms of its atmosphere and sparse dialogue, and is especially clever in terms of cinematography in how it depicts an intense subject: to see and be seen.

'I Am Not Him' swept the National Competition awards

The jury of the Golden Tulip National Competition awarded "Ben O Değilim" (I Am Not Him) with the Best Film Award, presented by the head of the jury and acclaimed director Derviş Zaim. This year, 10 films - three of which already had their Turkey premieres and four of which have their world premieres at the festival- competed in the Golden Tulip National Competition.

The Golden Tulip Best Film Award was given to "Ben O Değilim" ( I Am Not Him) directed by Tayfun Pirselimoğlu, who also won the Best Screenplay Award for the film, while Onur Ünlü won the Golden Tulip Best Director Award for his latest film "İtirazım Var" (Let's Sin). The award was again presented by Derviş Zaim to the director.

The Special Prize of the jury was awarded to "He Bû Tune Bû" (Once Upon A Time) by Kazım Öz. The Best Actress Award was given to Vahide Perçin for her performance in "Ayhan Hanım," and the Best Actor Award went to Serkan Keskin, most famous for his portrayal of "İsmail Abi" in popular Turkish TV series "Leyla ile Mecnun" (Leyla and Mecnun). The Best Music Award was shared between Ali Tekbaş, Serhat Bostancı and A. İmran Erin for their work in "Were Denge Min" (Come To My Voice) and Giorgos Komendakis for his work in "Ben O Değilim" (I Am Not Him). The award was presented by musician Attila Özdemiroğlu, who received the Cinema Honorary Award of the festival at the opening ceremony.

The Seyfi Teoman Best Debut Film Prize, presented for the first time last year in memory of the director and producer who passed away a few years ago, was also announced at the ceremony by the jury including director Jan Ole Gerster, actor Taner Birsel and director of "Çoğunluk" (Majority), Seren Yüce.

Nominated for an Oscar in the Best Film in A Foreign Language category, "The Missing Picture" reenacts the nightmarish rule and atrocities of the Cambodian Khmer Rouge regime. The film was the winner of the Film Award of the Council of Europe (FACE) this year, presented by the Human Rights in Cinema jury for films focusing on social problems and human rights. This year the jury was led by Atiq Rahimi, winner of last year's FACE Award. The award and a cash prize of 10,000 euros (TL 29,350) were presented by the Council of Europe.

Starring Nick Cave, "20,000 Days on Earth" was awarded the International Federation of Film Critics (FIPRESCI) prize in the International Competition section, while "He Bû Tune Bû" (Once Upon A Time) by Kazım Öz won the FIPRESCI award in the National Competition. "Tom a la Ferme" (Tom at the Farm) was announced as the winner of the People's Choice Awards sponsored by Radikal Newspaper, which is determined by festival goers' votes. "Were Denge Min" (Come to My Voice) by Hüseyin Karabey won the People's Choice Awards in the National Competition.