Quest to reveal the truth 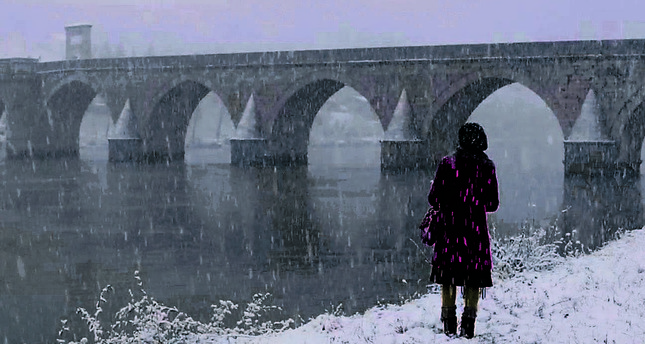 Bosnian director Jasmila Zbanic sets out to find the truth about the horror perpetrated against women during the Bosnian War in her movie "For Those Who Can Tell No Lies."

ISTANBUL — War is dreadful. Its memories linger in hotel rooms, in houses and on bridges. And some will not let go of what they know or feel to be the truth. Kym Vercoe, the heroine of "For Those Who Can Tell No Lies," is one such person. Vercoe sets out on a quest to reveal the truth about the Muslim women who were tortured in a secluded village during the 1990s ethnic cleansing in Bosnia. We caught up with the film's director, Jasmila Zbanic, while she was in Istanbul last weekend for the 33rd Istanbul Film Festival on a Bosporus boat tour organized by the Istanbul Foundation of Culture and Arts.

What looked like a gloomy morning slowly evolved into a sunny day for what turned out to be one of the greatest gatherings of the festival.

During the interview, we discussed everything from what she thought of this year's festival to the real-life story behind her latest feature.

Zbanic, who is no stranger to Istanbul having previously attended both the Istanbul Biennale and the Istanbul Film Festival, also acted as a past member of the judging panel. "It is one of my favorite places," she said, "The festival is so well-organized, presenting beautiful films. I always try to see as many as I can." "For Those Who Can Tell No Lies" is based on the true story of Australian tourist Kym Vercoe who visited the poetic little town of Visegrad on the Bosnian-Serbian border, taking along her video camera to record her trip. She stayed at the lovely Hotel Vilina Vlas and everything was off to a good start - until darkness fell. Come nightfall, Vercoe was haunted by ghosts of the Bosnian war who had been victims of horrible war crimes, including rape, committed in the very hotel she was staying.

Unlike many locals, she could not look the other way. Vercoe felt she could no longer merely be a tourist and so she set off on a quest to expose the atrocities that took place in the area - that is, the very things the locals had been trying to avoid and prevent outsiders from revealing, let alone talk about. Although it seems as though Zbanic chose a similar theme to her previous film "Grbavica" - a story that also presents women's perspectives of the war - this time we have "an outsider who feels as if she's been punched in the stomach when she finds out what happened."

When asked about how she decided on the plot for the film, Zbanic said she had been looking for material on the 20th anniversary of the Bosnian War as she wanted to depict the aftermath and how Bosnia was healing. "Then I came across the theater performance of Vercoe and immediately knew this was my story. Her play touches on the same emotions and subject that I wanted to include in my film. I also found the setting very suitable to tell this side of the story," she said. In this moving film, we watch as our heroine is literally haunted by ghosts of the war as she finds herself restless, unable to sleep and generally distressed in the hotel room. "She feels trapped and that something is wrong, and this was actually true. That is exactly what Kym experienced in real life," said Zbanic when asked how much of the film was based on fact.

Muslim population down from 63 percent to 1 percent, a fact Bosnian locals want to hide

The entire movie is shot on location, despite locals being incredibly reserved about the history of the war and not wanting to publicize the fact that in that very same hotel many Bosniak women were tortured and raped and in total 3,000 Muslim Bosniaks were killed. "The organizers of the filming said it wouldn't be safe for us to shoot there since the Muslim population was about 63 percent at the beginning of the war and now it is less than 1 percent. So they killed and expelled almost all the Muslims. They wouldn't want someone coming in and shooting a film about it," said Zbanic.

But she was clever.

She invited a Serbian friend over and asked him to pretend to be the director. Acting as discreetly as they could and choosing back streets as locations, the film crew somehow managed to finish shooting.

But Zbanic recalls the whole experience as being tense, because locals are suspicious of people with cameras.

Raising awareness about the victims of the war

In terms of drawing attention to human rights and raising awareness about women's issues in the region, "Grbavica" was a major success.

Thanks to the recognition it received and the media campaign launched and led by both the director and the film's fans, the government was forced to formally recognize the women who suffered during and after the war - mostly rape victims - as civil war victims and provide them with financial compensation.

When asked whether she is expecting this film to have as much of a powerful effect, Zbanic said, "This film is opening a lot of boxes. It will hopefully provoke a dialogue about how and why things are the way they are." And hopefully they will. Zbanic also revealed to Daily Sabah that unlike her previous two films, in her next project she wants to explore another side of herself - her "silly and happy" side and not just her socially responsible side. To this end, she is currently busy traveling the world and shooting her next film, a romantic comedy. It's already on my to-watch list!
Last Update: Apr 24, 2014 1:06 am
RELATED TOPICS