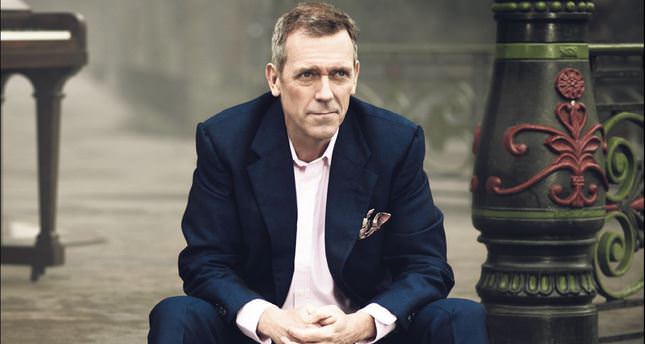 Dr. House will be in the house, Mevlana's poems will be sung at 21st

ISTANBUL — Every year in July, Istanbul once again brightens up with the legends of jazz along with successful names from pop, folk and world music. The festival, organized by the Istanbul Foundation for Culture and Arts (IKSV) and scheduled for July 1-14 this year, has already revealed some of its highlights. But at a press conference held right before the city celebrated International Jazz Day at Karaköy's Bej on Tuesday night, more exciting names included in the full program were announced.

Pelin Opçin, director of the Istanbul Jazz Festival, then took the floor to announce many exciting names, including the star of the popular U.S. TV series "House" - the multitalented artist, comedian, writer, director and jazz musician Hugh Laurie, who will perform on July 9 with the Copper Bottom Band.

Another exciting project announced was the premiere of "Mevlana Suite - the Eternal Day," which will feature Zülfü Livaneli's compositions based on English versions of Rumi's poetry.

The press meeting hosted some of the most eminent figures in the jazz world. After the meeting, the night continued with famous names such as Turkish photographer Muhsin Akgün and a DJ set by one of the best jazz vocalists in town, Elif Çaglar. Çaglayan Çevik, Kaan Sezyum, and Emel Kurhan also attended the night as DJs.

This year's festival will witness 28 concerts featuring over 200 musicians from Turkey and abroad at 13 different venues.

A new section of the festival will be the debut of a "Jazz in the Park" event, which will be held free of charge at Nisantası Arts Park, bringing together Istanbul residents and prominent young jazz musicians from Turkey and from the international jazz world.

The festival will kick off on July 1 with Four in the Pocket, featuring Elif Çaglar on vocals, Çagrı Sertel on keyboard, Alp Ersönmez on bass, Mert Önal on drums and Toygun Sözen on saxophone, which will take the stage after the opening ceremony in the Consulate General of Austria/ Austria Culture Office Garden.

The 21st Istanbul Jazz Festival is also supported by the Ministry of Culture and Tourism, the Istanbul Metropolitan Municipality and the Beyoglu Municipality, and tickets for the first shows announced are currently on sale.