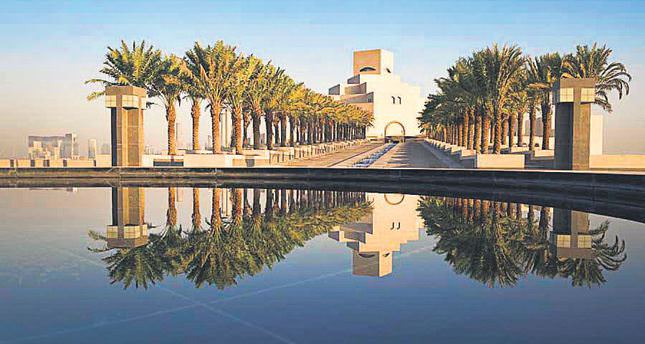 Energy-rich Qatar is gaining a foothold on the global cultural scene by lavishing billions of dollars on renowned artworks.Sheikha al-Mayassa, a sister of emir Sheikh tamim bin Hamad al-thani, is leading the push for art and has become one of the most influencial names in the art world

DOHA — Damien Hirst's "Miraculous Journey" - a group of 14 bronze foetus sculptures - makes an unlikely addition to the landscape of Doha, installed in front of a medical centre in the outskirts of the capital. Out in the middle of the desert, a large abstract sculpture by American artist Richard Serra rises up from the sand.

The deep-pocketed emirate, which has massive natural gas reserves, is pursuing world-famous art with the same vigour it has brought to attracting international sporting events, including football's 2022 World Cup. Sheikha Al-Mayassa, a sister of emir Sheikh Tamim bin Hamad al-Thani, has led the push for art, and recently inaugurated Serra's "East-West/West-East" - four 15-metre-high (50-foot) steel plates in the desert, reachable only with off-road vehicles.

Serra's "7" - a monumental work of seven 24-metre- high steel plates - rises up from a pier extending into Doha's harbour from the park of the Museum of Islamic Art, which was designed by the famed architect I.M. Pei. The towering sculpture was inspired by a minaret in Afghanistan and portrays the spiritual and scientific significance of the number seven in Islamic culture, according to the museum.

"Being able to build '7' and being able to build the piece in the desert at this scale is like meeting the Medicis in the 15th century," said Serra, referring to the Florentine family's patronage of Renaissance artists. "Those kinds of opportunities are rarely given to an individual. In my country art comes after football and entertainment," he added. Sheikha Al-Mayassa, who heads the Qatar Museums Authority, is well-known in the art world thanks to the large sums she has spent on acquiring masterpieces.Last year London's Art Review magazine called her the most influential personality in the field of contemporary art, saying she spends about a billion dollars on artwork every year.

The QMA declined to confirm the figure, just as it has not disclosed the cost of several works, including Paul Cezanne's "The Card Players," which is said have fetched a record $250 million (TL 528.77 million).The authority has invited top architects to design five museums for the capital.

Pei, the celebrated Chinese-born American architect behind the Louvre Pyramid, designed the Museum of Islamic Art with Cairo's mediaeval Ibn Tulun Mosque in mind, while France's Jean Nouvel has been asked to design the National Museum of Qatar.

In 2010 the emirate established the first museum devoted to modern Arab art. "To choose these incredible artists, and to choose great architects and create the Museum of Islamic Art... That really takes a vision," said Jean-Paul Engelen, director of QMA's public art division. The avant-garde vision of Sheikha Al-Mayassa sometimes appears to be on a collision course with the emirate's deeply conservative populace. Conservative interpretations of Islam forbid the portrayal of the human form, equating it with idolatry. In October, the QMA had to remove a statue of the infamous headbutt of French footballer Zinedine Zidan against Italian Marco Materazzi after it was installed on the Doha sea front. The five-metre sculpture by artist Adel Abdessemed triggered a wave of complaints on social media networks, with many viewing it as a violation of Islam.

Tareq al-Jaidah, director of the Katara Art Centre, says it may take time for Qataris to fully embrace the government's grand artistic vision. "It is something new and people have yet to be introduced to it. Let's take our time, let's not rush it," he said.