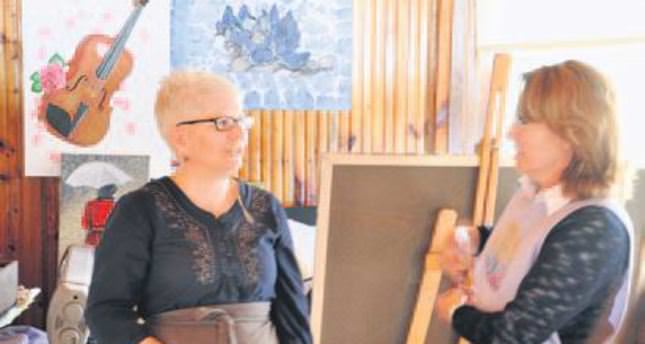 Femin Art, originally established in Trabzon in 2007 to support and help develop Turkish women artists, is inviting women of all ages to a workshop by local painter Suna Erdoğan titled 'Suya Çizgiler,' or 'Drawings on Water'

Art is an underestimated area, especially in the lives of Turkish women. As such, Femin Art takes great responsibility to enrich women's lives with artistic pursuits of their own and support them in expressing their unique imagination in various areas of art, such as painting, sculpture and photography.The organization even holds innovative workshops like producing paint from kale or painting on water with oil paint. Such workshops have been given by local painter Suna Erdoğan since 2011.

Femin Art is one of the biggest and most wellorganized nongovernmental organizations in Turkey to support women and help them discover their artistic abilities. Based in Trabzon since 2007, it has branches in Ankara, Istanbul, Çanakkale, Bursa, Foça (İzmir) and Tbilisi.After a few years of hard work, many workshops and classes and the motto that everybody has a hidden artist inside of them, Femin Art became widely recognized and gained the support of the Ministry of Culture and Arts for its events. With this recognition in 2011, it finally gained status in the international artistic community.

With strong connections to the international network of arts and foundations that support artistic initiatives, the organization started its own international arts festival with the participation of local painters from three countries in 2008. In 2011, the number of participating countries rose from four 10 and the art festival was transformed into a sevenday celebration. Aside from the aim of empowering women in art, Femin Art also has an agenda of calling attention to subjects like nature's preservation, ecological balance and promoting Turkey's cultural and natural beauties with their choice of themes for the festivals. For example, the theme of the fourth International Femin Art Painting Festival was Evliya Chalabi's "Colors on Canvases from Women Around the World," whereas the fifth festival had the theme of "From Nature to Art." Local painter Erdoğan graduated from Kadiköy Arts High School in 1979. Though she was accepted to Istanbul University's Fine Arts Faculty Department of Painting and won a scholarship from Italy, she decided to get married and start a family. When asked if she regrets the decision, she says she doesn't because art is not entirely a matter of formal education but rather a lot more about interest and effort.

Being a mother of two boys, a painter, stained glass artist and a chorist, she really is a woman of many talents. She lives and works in Tuzla, where she makes bespoke paintings for her friends and acquaintances.

Over time, she has improved both her skills and use of imagination and now shares her experiences in the field with women who are more or less in the same situation as her, caught up in life's thoughts and struggles, trying to find an area of their own in order to uniquely express themselves.

She has started a workshop called "Suya Çizgiler" (Drawings on Water), teaching women of all ages how to play with colors on a liquid and find their own shapes and styles using the ever-changing nature of water.

After many years of work and dedication, her efforts started to yields results. In 2010, her workshop "Suya Çizgiler" was chosen by a Turkish delegation visiting Italy to attend an exhibition of women artists, supported by the Municipality of Toscana. In 2012, her work gained recognition from the Free Artworkers Association, resulting in a broader circle of artists joining her network.

But a life-changing encounter was yet to come.On International Woman's Day in 2011 during a live painting performance with her class at Odakule Art Gallery on Istiklal Street in Istanbul, she met the founder of Femin Art, Şükran Yangınüst. This was a happy coincidence.

Yangınüst says about this encounter, "First I wasn't struck by her idea of using water as a basis for oil painting. In Turkey, we have a marbling history dating way back to the Ottoman Empire. Using water as a painting instrument is not an uncommon idea, but what was uncommon was what these women, some of who didn't have any education or experience in the field, could achieve with proper technical information, a little encouragement and a lot of imagination."

Afterward, a beautiful friendship and strong cooperation emerged from this encounter and even resulted in Erdoğan's membership on the board of Femin Art. Realizing that Femin Art shares her same ideals, Erdoğan started to work in cooperation with the organization and played an important role in the realization of the Erguvanlar Açarken (While the Redbuds Are Blooming) Festival in 2013. The organization was such a success that the American Woman's Association rewarded Femin Art with a certificate of merit for the hard work it had accomplished.

Yet they seem to have an incredible energy and focus to their work. Erdoğan's eyes were shining when she explained their project, the first Women's Painting Festival to be conducted on March 8 in Northern Cyprus. Invited by the Northern Cyprus Ministry of Culture, the organization introduced Cypriot women to a different form of marbling. Paintings made during the workshops were exhibited in the Museum of Painting in Kyrineia, Cyprus.

Taking an active role in women's art for 30 years, Erdoğan says she has been very happy to get to know Femin Art. She states that though she is the teacher in the workshops, she always finds new things to learn from her students because art is the ultimate form to truly make something new and personal out of nothing. "Suya Çizgiler" is a fresh and uplifting option for those who want to discover their dormant talents and be amazed by their skills with the help of a professional touch.