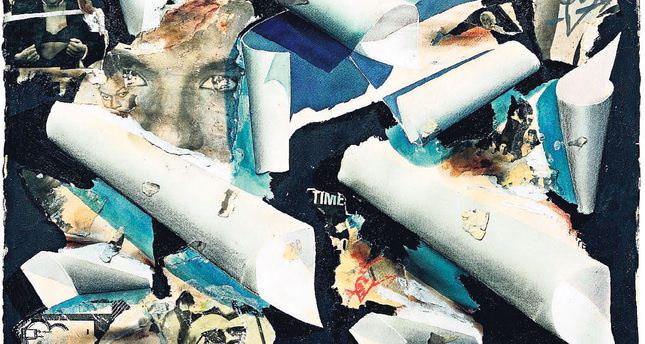 The Burhan Doğançay Museum located in the heart of Istanbul on İstiklal Avenue, is one of the rare examples of a retrospective, permanent museum and this year celebrates its 10th year

Burhan Doğançay (1929-2013) is one of the most wellknown modern Turkish painters around the globe. His works have been on display in more than 70 museums, including the Metropolitan Museum of Art in New York, the Pompidou in Paris and the British Museum in London.
Having a wide range of works, starting with early figurative paintings, followed by collections like Ribbons, Cones and a rather intriguing subject for art - urban walls - he created his own signature with masterpieces like Symphony in Blue, which is his largest and most expensive piece, created in 1989 for the very first Istanbul Biennale.

Beside paintings, he also started a new project in which he photographed urban walls all over the globe, which serves as a documentation of the time we live in or as it is said these days, the Zeitgeist. An artist of this scale definitely deserves a museum of his own dedicated mainly to displaying his work along with a small portion by his father, Adil Doğançay, who was also an important painter and also mentor of his son along with Arif Kaptan.

It is no surprise that the Burhan Doğançay Museum is located in Taksim, one of the most vibrant urban spaces of his hometown, Istanbul.
Near İstiklal Avenue, a four-floor building is filled with the energy and enthusiasm of Doğançay's paintings and photographs. The museum opened its doors in 2004 and has hosted viewers from all over the world ever since.

Bergin Azer, the manager of the museum, welcomed us with a warm smile and answered our questions with the same love and respect both to the painter and his works. First of all, we would like to ask you the significance of Burhan Doğançay's art for contemporary Turkish art.

It is very safe to say that Doğançay is the only Turkish artist whose works are in the most prominent 70 museums in the world. Ribbon Mania from his collection Ribbons is on display in the Metropolitan Museum of Art in New York, and Yes, I've Eaten Out of Garbage from the Grego series is in London's British Museum.

These are just a few to name in order to present his significance not only in the Turkish but also in the international field of art.
His achievement is the result of his pure dedication and persistence for 40 years, thus putting Turkish contemporary art and its artists on the international art map. His first important achievement was in 1965, when Billboard from his Walls series was acquired by the Guggenheim Museum for their permanent collection.

In 1992, Russia's Ministry of Culture honored him with its Medal of Appreciation; he is the first Western artist to have a solo exhibition at the State Russian Museum in St. Petersburg.

These are just two examples of a career that is filled with countless success stories. To sum up, Doğançay has eased, cleared and paved the way for younger generations of Turkish artists in their quest for international success and recognition.

An artist of this scale undoubtedly had to have his own museum in his hometown. Can you tell us the story of the Doğançay Museum? For over four decades Doğançay visited 114 countries and saw museums dedicated to artists from these countries like (Antoni) Tapies or to more renowned ones like Rodin or Van Gogh. The Doğançay Museum is the result of a promise he made to himself very early in his career. Some of the works displayed are those he saved for his future museum; even when going through very dire financial difficulties, he always refused to sell them - some dating from the early 1960s. In 1999, he bought a dilapidated shell of a building that required four years of restoration to meet international museum standards, opening its doors to visitors in 2004.

You have been managing the museum for four years and know the artist by heart. What is your personal favorite era and favorite pieces of Burhan Doğançay and why? From the 14 series that Burhan Doğançay created, my favorite has always been the Cones series. The Cones are multi-layered, and each painting tells several stories that can be visible depending on the proximity from which they are viewed. From a distance, some of them seem quite static and monotonous, yet when approached, there are funny, whimsical, enchanting, political stories that emerge.

His most famous painting, Symphony in Blue is from this series and along with its sisters, Magnificent Era and Mimar Sinan, was created specifically for the first Istanbul Biennale in 1987.

Doğançay saw urban spaces, especially urban walls as the mirrors of the time we live in. Could you elaborate on the subject and the realization of it through the art of Doğançay's paintings and photographs?

As Doğançay always said, "Walls are the mirrors of the society." Starting with the Lascaux Caves in France from 30,000 years ago to graffiti found on the walls of Pompeii ruins till today's street art in every urban area, humanity has always expressed itself on walls, whether they were propaganda, in revolt or declarations of love or any other uncontained feelings.

Although Doğançay is believed to be an abstract artist, he defines himself as a realist, painting urban walls that he has observed on canvas or paper.

His adventure started in the mid-1960s: While walking in Manhattan he observed a wall on Madison avenue for which he said, "This was the most amazing composition I have ever seen, with incredible colors peeping from other layers of torn papers."

With this observation, he found his true voice in his art and never faltered from it, with the exception of the Door series -- as wherever there is a wall, there must be a door.

What was the trick of Doğançay's wall paintings that made them so special, and what are the effects of his art on today's art?
For 50 years, walls have been the only theme worked by Doğançay. This has been divided into 14 series, each with its own story and reason for existence. Other than him, very few artists have concentrated on this subject; one of his peers (Jacques) Villeglé with whom Doğançay had a joint exhibition in 2008. Among the younger artists, (Jean-Michel) Basquitat can be named although his style is very different.

Ribbons is one of his most renowned and loved series all around the world. What do you think is the reason for this? Following the Breakthrough series with its bright red backgrounds, the Ribbons were the main subject matter of Doğançay from 1975 to 1985. They became his signature form, especially after he exhibited these for the first time in 1976 in Turkey. Their fluidity, the trompe l'oeile effect, an art technique that uses realistic imagery to create an optical illusion that depicts objects in three dimensions; depth and convex shapes are all stylized strips of paper peeling from walls. The ribbons, with their similarity to Islamic calligraphy have forms that are very familiar to collectors in Turkey. This familiarity has helped them tremendously with their popularity.
Last Update: May 15, 2014 1:49 am
RELATED TOPICS