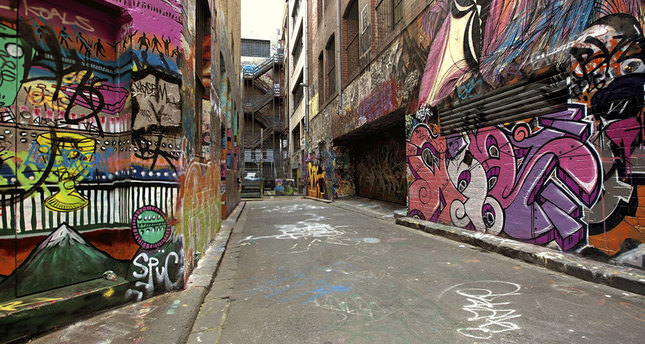 by AA May 17, 2014 12:00 am
ISTANBUL — For as long as people have been able to write, they have been writing on walls. The Romans wrote on the buildings of the towns they conquered, and even before words were used, cave men painted on walls. Now graffiti is moving from city streets and onto your mobile phone, thanks to two artists in Istanbul who have created a mobile phone application to help users find and appreciate local street art.

From the graffiti scrawled on the walls of the ancient city of Pompeii, to political murals in Northern Ireland from groups like the Irish Republican Army and Sinn Fein and communal projects like The Great Wall of Los Angeles, scholars have begun to recognize the importance of street art as a legitimate form of art, communication and political expression.

Graffiti and street art are inextricably linked and two entrepreneurs, Erbil Sivaslıoğlu and Onur Erdemol, are pioneers in Turkey in the curation of graffiti online and in their studio.

"Graffiti is now recognized as a legitimate reaction to injustice, a cry for revolution, a way to create awareness of socio-political issues, an expression of hope for the future, an effort to reclaim public spaces, or an attempt to beautify miserable buildings," says Sivaslıoğlu, curator of the "Bitti Gitti" Art Center and co-creator of the StreetArt Istanbul application.

Sivaslıoğlu created the StreetArt Istanbul application together with Erdemol. Sivaslıoğlu said their app, currently only available for use with iPhones, will allow users to find graffiti all around the city. Within the app, users will find a curated selection of contemporary street art in Istanbul, with directions to real-life examples nearby. Every artwork link has extensive information about the artist and the surrounding neighborhood, as well as interesting things to do nearby. The duo is planning to launch New York and London StreetArt apps as well.

Some people, though, consider graffiti artists as just vandals, while others argue that only specific kinds of graffiti can be considered art.
Hüseyin Kara, head of the cleaning department in Beşiktaş Municipality in Istanbul, considers graffiti an "illegal" form of writing or drawing when it ruins the environment, makes neighborhoods feel less safe, or insults the country's leaders.

"If art is defined by the artist's intent, then vandalism must be determined by the response of the owner of the vandalized structure," Kara says. "Whenever we want to clean an area, artists nearby won't allow us."

Controversies over defining graffiti continue between city officials, law enforcement officers, and the graffiti connoisseurs who wish to display and appreciate art in public locations.

Whether graffiti is considered art or a crime has different answers in different parts of the world, says Sivaslıoğlu.

"Graffiti is art, because it shows that there are people in this world who do wonderful things," he says. "Graffiti is not vandalism so long as it is not rude and offensive. Most graffiti helps buildings look better."

Istanbul is huge with hundreds of different districts, and street art has sprung up all over the city, notably along Istiklal Street, and in Tunel, Karaköy, Kadıköy and Beşiktaş. Visitors can find murals as tall as buildings, train graffiti, and stencil pieces as far away from downtown as Fatih, Maltepe, Üsküdar.