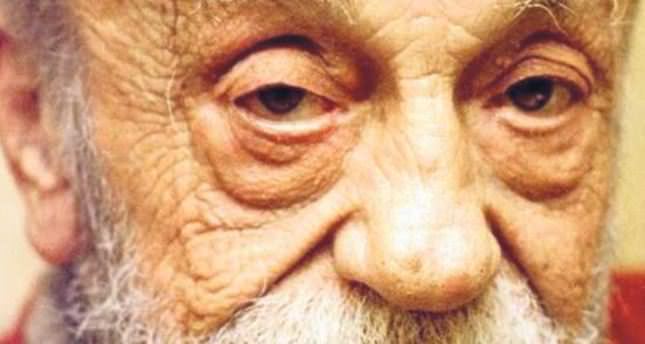 by Hakan Arslanbenzer Jun 07, 2014 12:00 am
The title "Sultan-ı şuara" (Sultan of poets) was given to the major poets of various eras in classical Turkish literature. Though this was not an official title like "poet laureate" - a poet officially appointed by a government or a conferring institutional -it often worked as if it was official.

The analogy of the sultanate comes from the understanding of poetry as a realm of words and meaning. Eighteenth- century Ottoman classical poet Şeyh Galip once wrote, "Sultan-ı sühan menem diğer nist" (I am the Sultan of the words, others not).

The "Kaldırımlar" (Pavements) series of poems were effective in making him widely known. He experienced a change of heart in the middle of his life and gave up his previous bohemian lifestyle to become a religious man. In the 1940s he began to criticize Turkish modernization as an Islamist and/or nationalist adversary. Until his death on May 25, 1983, he continued his life as a determined poet and writer at the center of political action. Early life Necip Fazıl was the only child of an upper-middle class Istanbul family.

His father Abdülbaki Fazıl Bey was a judge whose family hailed from Kahramanmaraş. His mother Mediha Hanım was from a wealthy family in Crete. The only child was born in 1904 in a big mansion in Çemberlitaş, on one of the streets descending toward the Sultanahmet Mosque. His parents called him "Ahmet Necip" after his great-grandfather. Thus, "Necip Fazıl" is the combination of his birth name and the name of his father's, which was the general pattern of Turkish names before the Surname Law was enacted in 1934.

Young Necip Fazıl was a sensitive boy who was fond of reading and writing. He said once, "I decided to be a poet when I was just 12. I was sick and lying in bed as my grandmother brought a notebook as a gift to me. The first moment I discovered that I wanted to be a poet was the moment I saw that notebook."

The sick boy was schooled in upper-class schools in Istanbul including the Collège des Frères, the American College, Emin Efendi Mahalle Mektebi, Rehber-i İttihad Mektebi, Büyük Reşit Paşa Numune Mektebi and finally Heybeliada Mahalle Mektebi. He was a spoiled boy and couldn't bare the discipline of school. Since he was often sick, his family tried to make him feel happy, which in turn did not make him a better student.

Ironically, he attended the Naval School in 1916. His spoiled childhood was now in the past. He found himself in the world of military discipline and his health began to improve. However, he was not at all fit to be a military officer. He was interested in reading and writing more than anything else. Two of his teachers at the Naval School were outstanding. One was Yahya Kemal, his literature teacher, who would be his master in poetry as well. And the other was his religious studies teacher Ahmet Hamdi, who would become the third chief of Religious Affairs of the Turkish Republic. An interesting coincidence is that Necip Fazıl and Nazım Hikmet, two major poets who represent two clashing political views in modern Turkey, went to the Naval School at the same time.

Nazım Hikmet was two grades ahead of Necip Fazıl. After his father died at an early age and the World War I ended, Necip Fazıl studied at the Philosophy Department in Darülfünun, which was the previous name of Istanbul University.

He met many important figures in Turkish poetry and political thought in Dürülfünun including Ahmet Haşim, Faruk Nafiz, Ahmet Kutsi and Yakup Kadri. In 1924, he passed a special exam and was sent to France to continue his education in philosophy there.

There have been legends about Necip Fazıl's life as a philosophy student in Paris. The fact is that he lived a bohemian life. His worst vice was gambling. In 1925, his scholarship was cut, so he returned to Istanbul.

Necip Fazıl's life from the 1920s to 1940s can be described as an extreme evolution. He was always on the extreme points of living, writing and thinking.

At first, he tried to continue his bohemian life in Istanbul, too, a point made clear in his poems. His early poetry was very much Baudelaireian. He tried to, as Charles Baudelaire, create gold out of mud. Necip Fazıl's poems written before his change were self-centered and a somewhat dark. His persona was nearly existentialist. The air of these poems was moody and depressive.

Necip Fazıl's change began after he met Abdülhakim Arvasi, a Nakshbandi order chief. The two often met and spoke at Kaşgari Mosque in the Eyüp Sultan district of Istanbul. He wrote "Tohum" (Seed), a theater script, under the influence of this friendship. "Tohum" was an existentialist play which incorporated some Islamist and nationalist views.

In 1936, Necip Fazıl published "Ağaç" (Tree) literary magazine. Ağaç was uniting talented young writers of the time, including Sabahattin Ali, Ahmet Hamdi Tanpınar and Cahit Sıtkı Tarancı. Some articles and poems published in "Ağaç" indicate a spiritualist point of view.
In 1937, Necip Fazıl wrote another play, "Bir Adam Yaratmak" (Creating a Man). Istanbul City Theater performed the play. This play of Necip Fazıl's was a triumph for the spiritualist point of view against the positivist and materialistic point of view in arts.
RELATED TOPICS