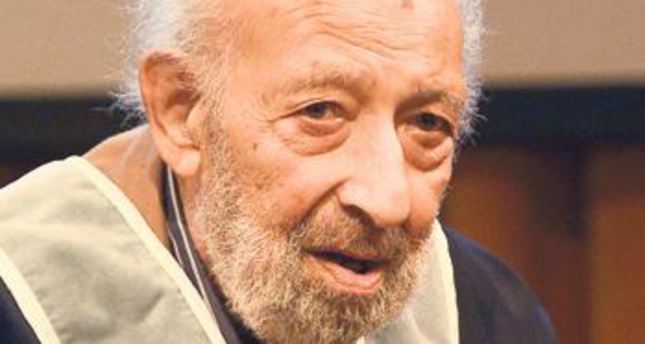 by Daily Sabah Jul 03, 2014 12:00 am
One of Turkey's few internationally known photographers, Turkish-Armenian photojournalist Ara Güler, was presented with an honorary doctorate by Bogaziçi University yesterday. Güler expressed his gratitude and proud sentiments on receiving his third honorary doctorate. "Such awards make me feel different.

I am going to look at the world better and add something more," he said. During the award ceremony, Chancellor Gülay Barbarosoglu stated that Güler refrains from calling himself a photography artist, but refers to himself as a global citizen. Nonetheless, Güler is the first person that comes to mind when talking about Istanbul. She also said that he tells history not through an existing language, but the universal language of imagery. "This is because Güler connects not only cultures, but also generations," the chancellor pointed out. Barbarosoglu wished that Güler were able to observe the world on behalf of mankind for many more years.

Speaking at the ceremony, author and Nobel laureate Orhan Pamuk, who also holds an honorary doctorate from Bogaziçi University, said he knew Güler from the age of eight. Güler was one of the most talented photographers even in Pamuk's childhood. In the 1970s, Güler was recognized as Turkey's "world-renowned photographer." "My first book was published in the 1980s. I was wondering how I became famous enough to have photographs with his signature. When he took my photos in 1994, I realized I had finally become an author," Pamuk explained.

The acclaimed author started to work in Güler's archive in 2000. While working on his books, Pamuk spent days and nights in the archive, which is reminiscent of a vast ocean. He stated the most important task in benefitting from Güler's large archive is to transfer it into digital form. Pamuk suggested the archive might be preserved by an association. "Created more than 50 years ago, the archive beautifully shows us Istanbul's visual memory," Pamuk pointed out. Güler's archive includes 800,000 photographs, 50,000 of which Pamuk had a chance to see. The senior artist successfully reflected the hidden atmosphere of Istanbul in the 1950s. "I was searching for the unforgotten or the deepest feelings in his archive, as if somebody was looking for his mother's face," he said. Pamuk underlined that in addition to Güler's artistic talents that it is also necessary to bring his documentation and journalism skills to the forefront.

The award ceremony took place at Albert Long Hall in Bogaziçi University. Chancellor Barbarosoglu presented the honorary doctorate certificate and gown to Güler for his achievements in promoting Turkish history and daily life through his highly artistic photographs around the world.
Last Update: Jul 03, 2014 3:35 am
RELATED TOPICS