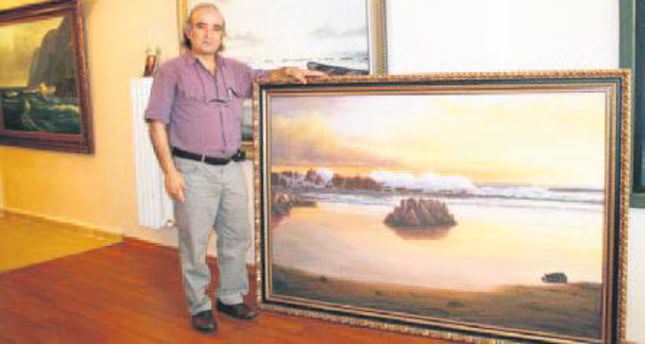 by AA Jul 23, 2014 12:00 am
Known as marine artist in the Turkish art world, Mustafa Günen has brought back his painting that disappeared 13 years ago. The paintings were found in storage. Speaking to the Anadolu Agency (AA), Günen claimed that the organizer, whom he worked with 13 years ago, never returned the paintings after their last exhibition and later disappeared. Günen said, "There was an arrest warrant for taking the woman's [the organizer's] statement yet she could not be found anywhere. The lawsuit was dropped due to a time lapse."

A while ago the owner of the storage talked about some anonymous paintings in his storage to one of his friend. Günen contacted him via the internet. He said that the total value of the paintings is approximately $200,000 (TL 423,920). Seven of the 12 paintings are large in size. Günen said he is very happy to retrieve his paintings. "The seven of my paintings came back because the organizer probably could not carry them.

Large paintings are hard to sell. Smaller ones can be sold easily," said Günen. Stating that he usually draws his paintings 100x170 cm of size, Günen said, "Right now, there is no other person in the world who does these paintings in that size and with this technique. It was written in magazines in New York that I use a technique that has not been seen for 200 years. There is an English painter who does these kinds of paintings smaller than a meter. He paints beautiful yachts, boats, sailboats on sea. He asks 300,000 (TL1.08 million) or 400,000 pounds for his paintings.

Successful marine artists want too much money for their works," Günen said. Some of his paintings were sold in London and became part of important collections. He further emphasized that the painters who paint the sea usually prefer small sizes. "As the space becomes larger, painting the water becomes harder so other painters complete their works by adding boats and other things. I do not use any object that limits the movement of the sea. I seldom use small boats on my paintings," said Günen.

He told some of his works were damaged as they stayed in storage for a long time. Günen's three paintings are shown in the presidential collection. Günen said he was very proud as he was presented a bowl with the star and crescent on it along with an offical badge.
RELATED TOPICS