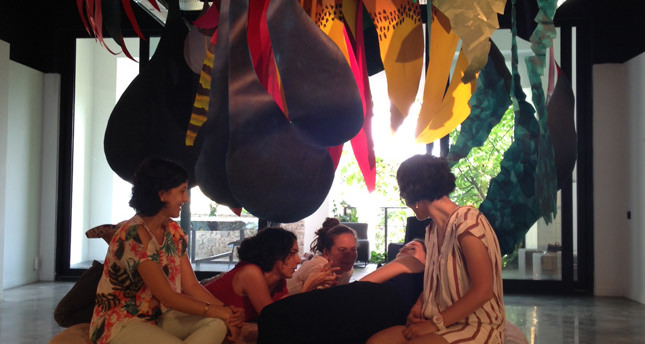 Galeri Non's new show, Rhizome, is a collaboration between Camila Rocha and Merve Ünsal, two artists who have programmed an exciting set of events for Istanbul's contemporary arts connoisseurs

Encyclopedia Britannica defines "rhizome" as a "horizontal, underground plant stem capable of producing the shoot and root systems of a new plant." Rhizome is also the title of a new show at Galeri Non, one of the most prestigious contemporary art spaces in Istanbul. Located on Nur-i Ziya Street (a street where the great composer Franz Liszt stayed during his Istanbul journey), Non is hosting works from different disciplines for this show, a choice that has become its trademark quality.

When you enter Non, you come across Camila Rocha's "Florikultur," a group of plants that organically grow in the gallery. "These suspended plants are a visual marker of Florikultur, reminding us of a world that is perhaps artificially kept outside the walls of the gallery space," the exhibition text informs us. "The plants are not only invited to the space, but are invasive, growing, uncontrolled over time."

Rocha moved to Istanbul 10 years ago. She was walking on Sıraselviler Street in Beyoğlu when a florist in İttihad Sigorta Pasajı got her attention. The shop's vitrine wood design, the turquoise color of its wall, the superimposing of flowers hidden in the passage where the florist was located and the shop's interaction with the adjacent tea place and second-hand furniture shops fascinated her.

"One day the florist was suddenly closed down," Rocha told me. "With abandoned traces like the 'Çiçekçi' sign, the building was suffering from gentrification and would be destroyed in couple of months. I rented the shop for 40 days, and there I was everyday working, everyday adding new species of plants on the space, with a sound installation by Hakan Iğsız."

Rocha's friends started coming and enjoying the environment she created there. They played music for plants with the artist collective HA ZA VU ZU. They had spontaneous gatherings and very stimulating private conversations all in that "green house."

When I asked her how she came up with the idea of using plants for the exhibition, Rocha talked about how since her childhood (she lived in a big garden in the suburbs of Sao Paulo) she had been obsessed with plants. "Inevitably it ended up truly coming out of me," she said. "But the cataloguing of the New Species of Plants precisely started in 2000. I had a greenhouse in the basement of my father's home, like a bunker."
Florikultur is the centerpiece of the Rhizome exhibition, which Rocha describes as "an open collaboration" where different dynamics co-exist together. "The idea is to do an environment of creative memories, collectively," she said.

The show will conclude with a sound performance by the musician Onur Karagöz in the third week of September; there will be collaborations with the art critic Ali Akay. Non will also stage a dance performance by the dancer and choreographer Filiz Sızanlı.

Another interesting component of the Rhizome show is a summer school, the brainchild of Merve Ünsal, an artist, writer and editor based in Istanbul. "Camila and I had discussed the possibility of carrying Florikultur to Non, and I have been excited about this idea from the beginning," she told me. "It is a beautiful space and its owner, Derya Demir, has a history of hosting such projects with both Non-Stage and her own roster of artists. So, it made sense to host this summer school."

Ünsal's summer school has had four sessions so far. "The first session was quite abstract and unstructured; I asked the participants, who came to the event not knowing what was going to happen, what their ideal summer school would be and what they thought of as education for artists," Ünsal said. "I'm personally invested in the idea of a summer school as I'm an artist who spends or wastes a lot of time thinking about what it means to be an artist and what it means to make 'work.' In the absence of a specific studio practice, pursuing a specific medium, I always carry the anxiety of not exactly knowing what will make a better artist."

True to the rhizome concept, the curriculum of Ünsal's summer school is constantly changing. "I'm figuring things out as I go," she said, adding: "This is something that Camila welcomes, as we are able to adapt the summer school to whatever is happening at Rhizome, and it is a situation that doesn't leave any trace in the space, except for people who are there during the sessions. Rhizome challenges the idea of having an exhibition of objects to look at, and I think that's how the summer school populates the space."

In the second session of the school, participants watched Yusuf Etiman's work, entitled "Kino," and talked for an hour. The third session was a video screening from UbuWeb, a web-based resource for avant-garde material. "I made a selection based on the horrible current events, focusing on artistic responses to the occupation of Palestine," Ünsal said. The fourth session was led by Fisun Yalçınkaya and Erman Ata Uncu, two journalists who led a conversation on arts journalism and cultural reporting in Turkey.

Rocha's positive feedback had been crucial for Ünsal. "I think she has created an environment for other artists and producers to feel comfortable making their own work, following their own agenda. Derya's giving up of the space during the summer to this project, providing us with logistic support, are invaluable. This is a very initiative-minded thing to do, and I very much appreciate it," she said.