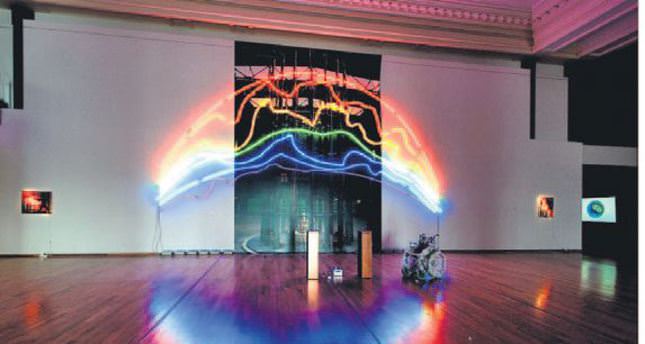 Renowned Turkish-Armenian artist Sarkis Zabunyan's work will be displayed at the Turkish pavilion at the 56th Venice Biennale, which will run between May 9 and Nov. 22 next year

The 56th Venice Biennale will showcase Turkish-born Armenian conceptual artist Sarkis Zabunyan's new artwork under the curatorship of Defne Ayas. The international art exhibition will run from May 9 to Nov. 22 in 2015 at various locations around the city of Venice. Organized by the initiative of the Istanbul Foundation for Culture and Arts (İKSV) and with the gracious contribution of 21 supporters, Turkey has a long-term venue in the Venice Biennale. Zabunyan's works will be on display at the Pavilion of Turkey at the Arsenale, one of the main event venues recently secured for the duration of 20 years from 2014 to 2034.

Graduating from Mimar Sinan Fine Arts University, Zabunyan introduced his first exhibition in 1960 at the Istanbul Art Gallery. He started his professional career as a painter, yet performed different forms of art including sculpture and interdisciplinary (visual and audio) installations. The master artist's works were previously presented at many art centers, museums and galleries from the Paris-based Centre Georges Pompidou, the Museum of Modern Art and the Louvre Museum; the New York-based Guggenheim Museum, the Bonnbased Art and Exhibition hall of Germany, the Berlin-based Bode Museum and the Kuntshalle Dusseldorf. He also participated in prestigious exhibitions including, "When attitudes become form" (Kuntshalle Bern, 1969), "Documenta VI," "Documenta VII" (Kassel, 1977 and 1982) and the biennales of Sidney, Shanghai, Sao Paulo, Moscow and Istanbul.

His recent solo shows were displayed at the Gallery Mana (Istanbul, 2013), the Arter (Istanbul, 2013), the Museum Boijmans van Beuningen (Rotterdam, 2012), the Galerie Nathalie Obadia (Paris, 2011 and 2014) and the Centre Pompidou Contemporary Art Center (Paris, 2010); Contemporary Art Museum (Geneva, 2011) and the Istanbul Modern. Zabunyan has been residing in France since 1964.

Curator Ayas is currently working as the director of the Witte de With Center for Contemporary Art in Rotterdam. Ayas has also been a curator of PERFORMA, the biennial of visual art performance of New York City since 2005. She founded Arthub Asia in collaboration with Shanghai-based Prince Claus Fund two years later. In 2012, she co-curated the 11th edition of the Baltic Triennial of International Art. Ayas completed the De Appel Curatorial Program in Amsterdam, and received her master's degree from the Interactive Telecommunications Program at New York University. She holds a bachelor degree in Foreign Affairs from the University of Virginia. For a while, she worked as education and media project coordinator at the New York based New Museum of Contemporary Art.