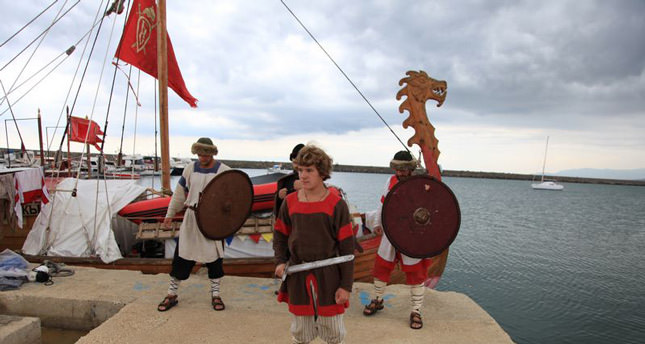 Six Russians traveling on a 15-meter-long Viking warship to promote the culture of their ancestors have arrived to the coast of Tekirdağ in northwestern Turkey, on their way to Serbia

Viking 'descendants' moored on the Marmara coast as they tour the Black Sea and Mediterranean regions. A Viking longboat has moored in the Marmara coast as a group of Russian friends recreate the seafaring expeditions of their forefathers. The six friends arrived in Tekirdağ, on the northern shore of the Sea of Marmara, after a tour of various ports around the Black Sea that began last month. Wearing traditional Viking dress, the sailors disembarked their 15-meter ship to put on a display of folk dancing and swordfighting.

Vikings from Sweden are thought to have settled in modern-day Russia and Ukraine in the 8th and 9th centuries. Known as Rus, they traded along the rivers leading into the Black Sea and becoming a well-established civilization, even serving as bodyguards to Byzantine emperors, with one carving Nordic runes into a parapet in Istanbul's Hagia Sophia. One of the travelers, Father Feoktist, said the group is heading for the Adriatic port of Bar in Montenegro.
RELATED TOPICS