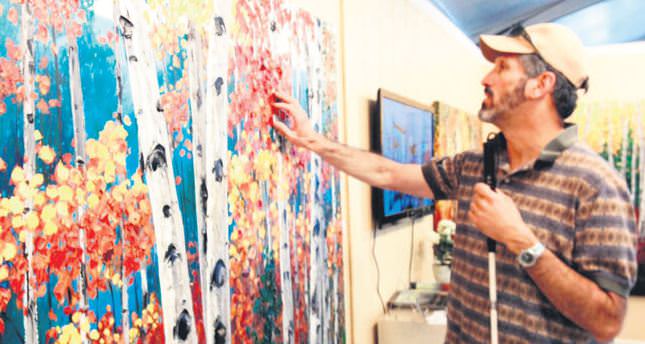 by AA Aug 27, 2014 12:00 am
In 2010, Turkish artist Türel Süt created an art project "Renkleri Hissetmek" (Sense the Colors) for the blind and partially sighted people, allowing them to touch paintings through embossed panels. His project was introduced in 15 European countries, and will be turned into a museum next year in Switzerland.

Speaking to Anadolu Agency, the Germanybased artist criticized the practice of forbidding visitors to touch artwork in museums and galleries. His project aims to enable blind people to access art and has received very positive feedback. "Art is for everyone, not only for those who can see the world," Süt said. The artist's creative works were previously displayed in Germany and Switzerland. "I focused on the eyes and faces of animals in my works. I tried to express their suffering and make them heard," he continued.

The exhibition addresses the senses of smell, hearing and touch in a way that simulates looking at the paintings. Blind people can touch special panels, allowing them to feel paintings. Meanwhile, they can listen to the information about the dimension and colors of paintings in Turkish, German, Italian and French through headphones. Thanks to advanced technology, blind visitors can distinguish colors on paintings through different scents and temperature changes. "To illustrate, they feel green through the scent of freshly-cut grass or hot yellow through rising temperatures," Süt continued. Sense the Colors was announced as one of world's most valuable projects and awarded with a "Golden Key" by the Internationales Blindenzentrum (International Center for Blind People). The project was proposed to turn into a museum at the center situated in Switzerland's Müsterlingen municipality next year.

"My dream has almost become true. It is a great honor for me and for Turkey. I do everything I can to successfully represent my country abroad," he concluded. Süt graduated from the Painting Department of Dokuz Eylül University's Fine Arts Faculty. He moved to the U.K. and continued working in Germany afterward. Süt was presented with a number of awards for his social activism involving artwork over the last 10 years.
Last Update: Aug 27, 2014 2:16 am
RELATED TOPICS