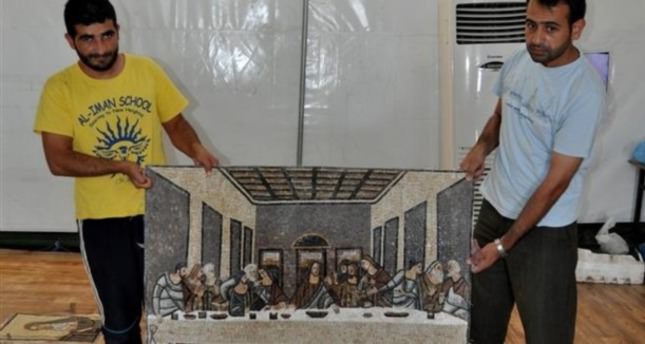 by AA Sep 03, 2014 12:00 am
Syrians who attend mosaics courses at the refugee camp situated in Adıyaman learn a profession and portray historical places with through the medium.Some of the Syrians who took shelter in Turkey after fleeing the civil war in their country continue their lives at refugee camps. Training courses are held for our Syrian guests whose needs are being met by the government.

The training course in Adıyaman has attracted many Syrians. People who attend the mosaics course bring little marble pieces together and describe the historical and cultural places of the city. Qualified instructor Mehmet Emin Geçcan, in his statement to Anadolu Agency (AA), said that they have opened the mosaics course in order to make the art more widespread. He said that they give lessons five days a week and that some of the trainees learn the art for the first time. He pointed out that trainees can earn their livings by performing art and their aim is to help Syrians to have a profession. He further said that in the mosaics, trainees describe the places of Adıyaman. According to Geçcan, most of the Syrians are good at making mosaics, "Our trainees portray important values of Adıyaman such as Cendere Bridge, the mountain goats of Adıyaman and Mount Nemrut," adding that attendees finish one work in three to four days. He said that they cut the soft colored marble into small pieces and put them together according to an example photo. He said they will introduce the mosaics to the world and to Turkey with an exhibition that will be held at Feshane as a part of Adıyaman Promotion Days. He emphasized that Syrians can get away from the effects of the civil war, even if just a little, thank to these courses. "Here, we learn about our cultures that have so much in common. Moreover, through these courses, we are able to show our hospitality to our Syrian brothers and sisters as well as the world," Geçcan said. Syrian Mahmud Casım said mosaic art is very ancient and that he was performing this art back home before the civil war broke out. Casım said that he was very happy to have a chance to do something entertaining, adding, "We are keeping ourselves busy here. We are happy to produce something. We are learning this art so that we can perform it when we go back to our country."