Foam becomes art in the hands of turkısh artist 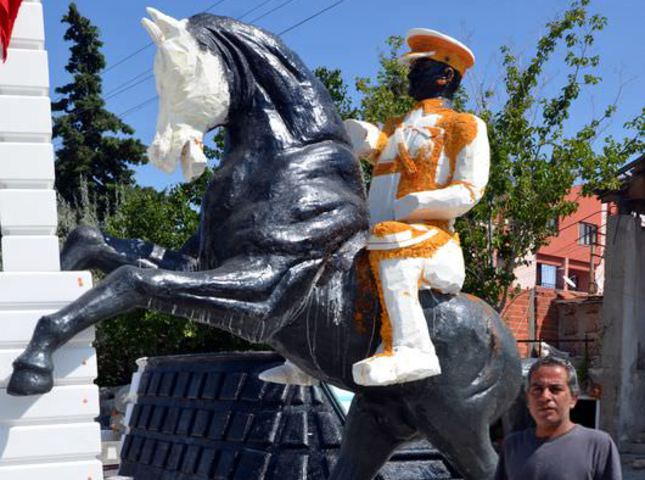 A Turkish artist designing sculptures made of foam creates masterpieces at his small workshop in Burdur. From the statues of Atatürk to the miniature of Çubuk Dam, his works decorate municipal parks across the country

Abdullah Korkut, who graduated from the Ankara Gazi University Department of Fine Arts, makes sculptures from polystyrene foam. Working with six people, both graduate and undergraduate students, at his workshop in Yenimahalle neighborhood of Burdur, Korkut makes sculptures of Atatürk and soldiers, horses, cows, sheep, goats, carts and other animals. Korkut makes the structure of the sculptures from iron and then covers it with polystyrene foam. Shaping the foam with his hands, he later wraps the sculpture with polyester and fiber.

Finally, he paints the sculptures with acrylic enamel and lets them dry before placing them on display. Speaking to an Anadolu Agency (AA) reporter, Korkut said that he mostly receives orders from municipalities and government agencies. He underscored the importance of Atatürk statues, said, "A team of six people work on an Atatürk statue for a month because it requires very intricate work." He further said that he and his team work on statues belonging to people who fought in the Turkish War of Independence. He said that they have recently finished a statue of Yörük Ali Efe, one of the heroes of the Independence War, on horseback on the request of Tefenni Municipality of the Burdur province. Korkut said that his animal sculptures also decorate municipalities' parks. He pointed out that they do not use templates, and instead use their hands to shape the sculptures, adding, "We make our sculptures 25 percent bigger than the original. As we improvise, there is no way that we are able to make the same sculpture twice."

Korkut said that they made a 45 meter- wide miniature of Çubuk Dam, the Statue of Humanity in Nevşehir, a historical place in Burdur, some Atatürk statues in Antalya, an eight meter-wide bas relief map of Turkey and statues of people who lost their lives during the sabotage in Sivas that happened on July 2, 1993 at Hotel Madımak. He added that they receive orders from all around Turkey. He said the prices of the statues vary from their degree of difficulty and are usually sold between TL 3,000 to TL 25,000, noting their sculptures have been displayed in Ankara, İstanbul, Antalya, İzmir, Denizli, Siirt and Sivas, so far.

His main material used, polystyrene, is made from petroleum and is a type of resin that is very hard, fragile and shiny. It shows resistance to UV lights and resists impact as well.

Moreover, it is cheap and malleable. It is commonly used in doors, cooling towers, pipes, foams, automobile parts, electronic and other devices as insulating material as well as disposable cups and plates.
Last Update: Sep 15, 2014 1:52 am
RELATED TOPICS