Men in Skirts back in town with roger salas 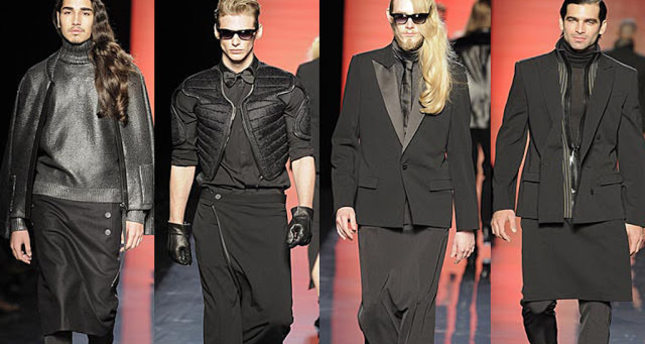 A colorful shopping marathon will be waiting for shopaholics from Sept. 26 to 28 at Istanbul Forum Shopping Mall. The forthcoming event plans to bring a unique blend of workshops, special runways and panels with top fashion designers "I

Forum Fashion Week will celebrate its fifth edition with a dazzling runway show "Men in Skirts" on Sept. 23 at Pera Palace. Making its debut back in 2006, the collection, curated by world-renowned fashion critic and journalist Roger Salas, stirred the fashion world from London to Madrid and New York to Athens. Salas' collection will be also presented to Istanbulites at Marmara Forum Shopping Mall and take a tour of Turkey at nine other Forum malls until Sept. 28. Daily Sabah spoke to Salas about the history of men's skirts, their place in other cultures, men's skirts as a fashion trend and male celebrities who look stylish in skirts.

Daily Sabah: Since 2006, "Men in Skirts" has been introduced to thousands. How did people find your idea when it was first mentioned in Madrid?

Roger Salas: They looked really surprised at first, some of them did not even find it interesting.
But, Madrid Fashion Week's famous director Leonor Perez Pita - we call her Cuco Solana - liked it and always showed her support.

DS: Does your collection include both traditional and modern designs of men's skirts?

RS: I tried to make a balance between contemporary designs and Scottish kilts and the pareo, mostly worn by those living in southern sea coasts. When men wear skirts, it creates a theatrical atmosphere, which I prioritize in my shows.

DS: As a fashion critic and designer, which men's skirt looks more attractive for you in a historical context?

RS: The design of men's skirts evolved over time and passed many complex but impressive stages. If we talk about the classical period, we should mention the skirts worn at the time of Alexander the Great and Renaissance. Later, mini-skirts were invented as a protest when Pope banned men from wearing short skirts. As usual, there is always a reaction against bans. In the 18th century, a wide range of men's skirts were designed with eastern prints in the Netherlands.

DS: Considering the religious symbols, do you think "tennure," the skirt worn by whirling dervishes, has a metaphorical meaning in Sufism?

RS: Sure. The garment features strong lyricism. Think about why they are used by whirling dervishes and how they enhance their each movement. Sufism is the starting point of a trend in aesthetics. Jean Börlin and Ballets Suedois choreographed the first Western ballet about whirling dervishes in Paris in 1920. He was greatly inspired by the Sufi faith and its aesthetics.

DS: Different designs of men's skirts from the Ancient Roman times appeared in today's popular TV series. Which Hollywood actor do you think looks most charming in it?

RS: I think James Franco and Henry Cavill might look good in men's skirt. Brad Pitt also wore a Roman-era skirt in Troy. When it comes to well-known TV series "Spartacus," skirts do not fit for muscular men. Indeed, the average man's height was between 1.50 and 1.60 meters in Roman times. A man in 1.80 meters height used to be regarded as a giant person. An average- height man is ideal for men's skirts.

DS: Could you tell me more about modern designs in men's skirts among contemporary fashion designers? Is there any designer that you would like to mention?

RS: The skirts by Jean-Paul Gaultier and Kenzo take an important place in making them widely-worn. Recently, Burberry Prorsum has adapted traditional men's skirts into modern times. Japanese fashion also contributes the trend. I like the skirts by Yamamoto and Rei Kawakubo (Comme des Garçons).

DS: In contrast to the common belief, do you think men's skirts look masculine?

RS: Of course, they create a masculine look in men. Bear in mind, the person who wears it is also influential. As an example, Scottish kilts are considered very masculine among local people. Traditionally, kilts are worn without underwear, which may sound frightening.

DS: Which traditional men's skirts are we going to see in your collection soon?

RS: There will be many kinds from kilts to other pieces worn by dancers and ballets such Nacho Duato, currently the Artistic Director of Berlin State Opera and Ballet, which performed in "Compania Nacional de Danza de Espana" (Spanish National Dance Company). Alternatively, you will see a "bata de cola" (flamenco skirt) designed by Armani and worn by Joaquin Cortes in Seville. My collection also includes pop-art and retro- style skirts by Spanish and Portuguese fashion designers.

DS: Men's skirts take a significant place in Flamenco culture. As mentioned, famous dancer Joaquin Cortes wears a skirt on stage. What would you like to say about men's skirts in Flamenco dancing?

RS: Bata de cola skirt made its debut in Milano. The original skirt and other similar designs used in concerts will be on display. They were worn by classical ballet performers later, which was a big promotional success. Luca Giaccio of Munich Ballet wore this during his performance inspired by Aida Gomez's flamenco. I believe both Cortes and Giaccio look very masculine in such long-tail skirts.

DS: You have worked at the prominent El-Pais newspaper for the last 29 years. Which actors wearing skirts might be big news?

RS: When we published the catalogue for Men in Skirts back in 2006, I did not want to use professional models. They modeled for catalogue covers and big outdoor posters. I called actors, physicians, break-dancers, boxing champions, surfers and brokers. We created an impressive catalogue. Those who rejected my idea regretted about their decision. It would be interesting to see American actor Ivan Sanchez, who was a former model, and William Levy in skirts, maybe Irish kilts.

DS: Apart from Istanbul, which cities was your collection introduced in across the world?

RS: The collection visited four cities: Madrid (2006), Seville (2009), Valencia (2010) and Lisbon (2010). The fifth exhibition will take place in Istanbul. We scheduled to have three more, but cancelled due to financial crisis. They might be held from 2015 to 2017. I would like to present my collection in Moscow, Tokyo and Bogota. Cortes's skirt still continues its tour. It was displayed in St. Petersburg, Los Angeles and Rome. In Italy's Torino city, the skirt was put in the main poster of a well-known theater campaign. It turned into an icon and a creative symbol for theatrical fashion and design art.

DS: What do you know about Istanbul?

RS: It would not be wrong to say Istanbul is one of my favorite cities. The architecture, cultural heritage, locals, scents and voices are all in harmony. I have been in Istanbul three or four times and found something that stole my heart each time. When I read Ahmet Hamdi Tanrıpınar's book "Huzur" (Peace), the image of the city and its history was engraved in my mind. I also think Orhan Pamuk's "Huzur" is one of the best books depicting Istanbul, as other reviewers say. Previously, I wrote some articles about the 17th century baths, the sarcophagus of Alexander the Great at the Archeology Museum, but know I can write more about there.

DS: Do you have any future projects?

RS: I want to exhibit the collection for at least two more years and finish the timeline previously scheduled. We started to work on the collection more than 10 years before. The participation of local designers is a part of the catalogue's success. This exhibition achieved great success because it became a part of a global industry that gets more and more complicated day by day. Our work preserves its identity as a style book and presents fashion as a culture. On the other hand, I want to finish my travel book so I have to come back to Turkey and visit Troy. This is my dream.
Last Update: Sep 23, 2014 2:06 am
RELATED TOPICS