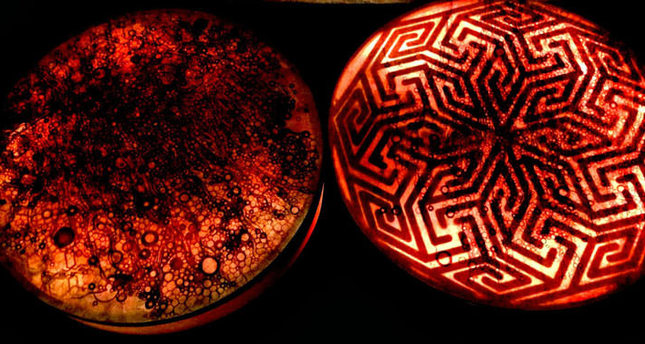 by Daily Sabah Sep 24, 2014 12:00 am
Over the centuries, geometric patterns have dominated Islamic art and design. Artists embellish a wide range of artworks through geometric ornamentations, reflecting the artistic view of the Islamic world. This week, experts and researchers gather to discuss this unique form of art at the "2nd International Workshop on Geometric Patterns in Islamic Art" within the framework of "In the footsteps of the Seljuks" in Istanbul.

Kicking off last Sunday, the workshop will continue until Sept. 27. Participants will be spending the event's last three days in Konya, which stands out with its Seljuk-era architecture, and its interdisciplinary seminars will open the doors to new projects on Islamic art. Islamic art is greatly inspired by geometric and mathematical systems, and there is no other civilization that was able to bring the art of geometry into such a high and complex level. Turkey houses the finest examples of Islamic geometric patterns within its borders. While researchers and industrialists in Europe and the U.S. have explored this artistic practice, Turkey does not draw the necessary attention to this field. As a result, the annual workshop is being held in Istanbul and Konya, the centers of Seljuk-era architecture, with the participation of local and international researchers to emphasize Turkey's Islamic art, deign, and architecture.

Organized by the Istanbul Design Center, the first edition of the workshop took place last year with the theme "Historical Development and New Trials." Future workshops will touch on different subjects, and digital and written publications will be available as an archive of the workshops.

Concurrently held with the workshop is a group exhibition "Hendesen," which showcases a rich collection of geometric patterns. The workshops and seminars focus on Islamic art from the aspects of different fields such as philosophy, mathematics, history, architecture and chemistry. The event is held in English and simultaneous interpreting is available during the sessions. Participants include professional artists along with undergraduate and graduate students in architecture, social sciences, arts, mathematics and physics.