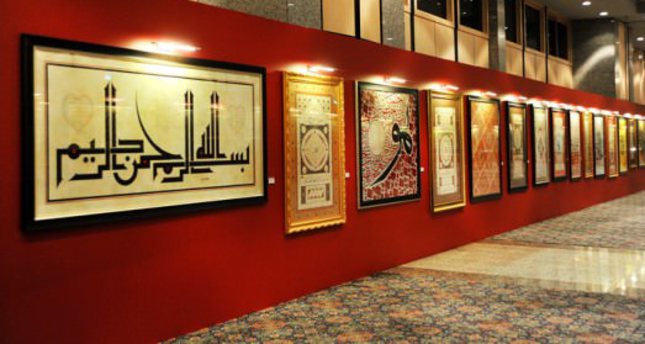 by Daily Sabah Sep 26, 2014 12:00 am
The 41-piece exhibition "Aşk-ı Nebi" (Love for the Prophet), which was previously presented at the Hagia Sophia as part of the Sacred Birth Week celebrations marking the 1,443rd birthday of Prophet Muhammad, was opened for visiting at the Turkish Cultural Center of New York following an official opening ceremony this week. The ceremony was held with the participation of Turkish President Recep Tayyip Erdoğan, Northern Cypriot President Derviş Eroğlu, Turkey's Ambassador to Washington Serdar Kılıç, U.N. Permanent Representative Halit Çevik and Turkish Consul General to New York Ertan Yalçın. Sponsored by Yıldız Holding, the calligraphy exhibition will display the recent works of well-known calligraphy and ornamentation artists until Oct. 21.