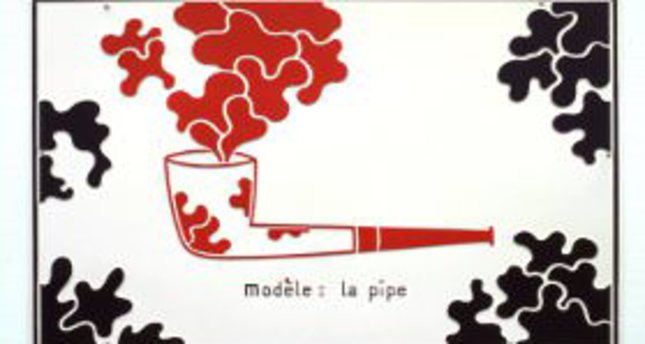 by Daily Sabah Sep 26, 2014 12:00 am
The exhibition will be organized in partnership with the S.M.A.K. Museum for Contemporary Art in Ghent, Belgium, which has the largest collection of Marcel Broodthaers' work. The exhibition's curator is Hasan Bülent Kahraman and this is the first time that the works of Marcel Broodthaers will be exhibited to this extent in the world. Marcel Broodthaers, who used writings, words and texts as subjects in his wide-ranging conceptual artwork and put objects at the heart of his pieces, later made the concepts the backbone of his art. Kahraman wrote a detailed review of the artist in the bulletin for the exhibition, which can be seen at the gallery, thusly: "Marcel Broodthaers was an artist who merged the changing artistic practices of the last quarter of the century with the revolutionary movements of the early 20th century. [...] Broodthaers aimed to take art beyond the ontological boundaries of his own time - a pursuit perhaps common to all great artists. But the revolutionary and avant-garde quality of this move is evident. Broodthaers could not have achieved such a massive result solely by discussing the inherent problems of the artwork. Such an endeavor would have made him a mere theoretician. Instead, he tried to achieve this result with the art, or rather the arts (verbal and visual) he himself produced. Conceptualization played the biggest part in his art. However, he did not confine himself to a study of concepts and an enterprise aimed at transforming them. Space and time constituted one of his main concerns."

Marcel Broodthaers, who was born in 1924 in Brussels and died in 1976 in Cologne, was a writer, poet, filmmaker, journalist and visual artist and was actively involved in the intellectual community of Brussels. He had published two poetry books and produced a movie by 1960. His visual art career began in 1964 when he embedded 50 copies of his latest book of poems called "Pense-Bete" (Reminder) in plaster. Broodthaers exhibited daily objects, words, texts and childish drawings and most of them included verbal and visual allusions in his personal exhibition, which opened in the same year. He printed his works on almost everything from books to catalogues, from canvasses hung on the wall to plastic reliefs. He used various platforms to define the relationship between an object's image, symbol and meaning. Breaking the bond between objects and their classifications in daily life, he exhibited his work in new relations in order to examine the logic that perception is based on. In 1961, he began to prepare the slide projects that he defined as "systeme de lecture" (reading system) or "Photo-film."

Broodthaers examined the roles of institutions, presentations and texts in the perception of an artwork with the concept of given meanings. He established a conceptual "Modern Art Museum" consisting of postcards, paintings and objects he considered as artwork in his home in Brussels in 1968, which was followed by various installations. The museum had institutional materials, the invitations were sent and the "director" made the inauguration speech. The crates leaned on the wall but there was no visible art.